The Untold Stories Of Marine Special Ops ‘Getting Some’ Against ISIS

U.S. Marine Special Operators on the ground in Iraq and Syria in the coalition's anti-ISIS fight have been getting into... 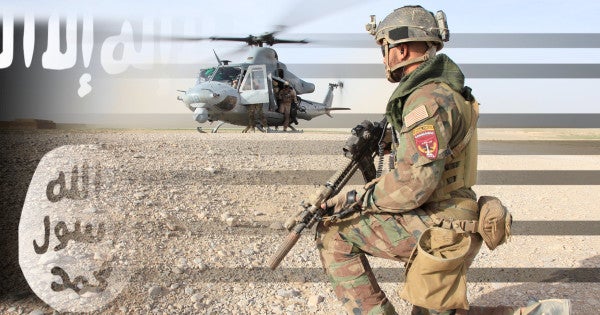 U.S. Marine Special Operators on the ground in Iraq and Syria in the coalition's anti-ISIS fight have been getting into plenty of direct combat going back to at least January 2016, according to award citations obtained by Task & Purpose.

Although President Barack Obama and Pentagon leaders often explained that the battle against ISIS was being waged “by and through” regional partners, with U.S. troops usually staying in the background safely behind the lines, documents from Marine Corps Special Operations Command show that “getting some” — in infantry parlance — wasn't just reserved for their partners.

I previously reported on three award citations for a Marine Special Operations team (also known as “Marine Raiders”) that covered January 2016 to July 2016, which were obtained through a Freedom of Information Act request. Now I can reveal another set of slightly-redacted awards, this time covering July 2016 to January 2017.

For actions during that period in support of Operation Inherent Resolve, a special ops element leader (typically a Staff Sgt. or above) and assistant element leader (typically a sergeant) received the Navy and Marine Corps Achievement Award (with combat distinguishing device) for their actions in fighting ISIS, which at times were firing at them with accurate machine-gun fire, recoilless rifles, and mortars.

For example, while working with the Peshmerga to isolate the then-ISIS held city of Mosul, the element leader's position came under heavy fire from 82mm mortars and recoilless rifles, his award citation said. Exposed to the fire and disregarding his own safety, however, he fired a total of 88 mortar rounds back at the enemy, resulting in 24 killed.

And during two operations with partner forces, his teammate exposed himself to “withering fire” and suppressed the enemy as they fired a “heavy volume of accurate” machine-gun fire toward his position. Later, during another large operation, the assistant element leader executed a successful mission with mortars to take out an ISIS sniper, all while he was being bracketed by their own guns.

The third citation is for a Navy Corpsman, who served in the same company as the two previously mentioned Marines, but on a different team, from July 2016 to January 2017, a spokesman for Marine SOC confirmed.

According to the citation, the special operations independent duty corpsman (a specialized and more rigorously-trained version of the Navy “Doc”) came under heavy fire from concealed enemy positions roughly 500 meters away during an operation on Aug. 27, 2016. As his teammates sought cover behind vehicles, the doc threw smoke to obscure their position and grabbed a MK13 sniper rifle and suppressed the enemy positions “until all were silenced.”

Then in Oct. 20, 2016, the corpsman “exposed himself” to withering enemy fire as he conducted remedial action on a vehicle-mounted machine gun so he could return fire during an ISIS counterattack.

Although Marine Corps Special Operations Command redacted the operators' names, ranks, and units, at least now we can peel back the onion on some of their stories. The full citations are below: