There are a million ways to be killed or wounded on the modern battlefield: bullets, bombs, drone strikes, a tomahawk-wielding... 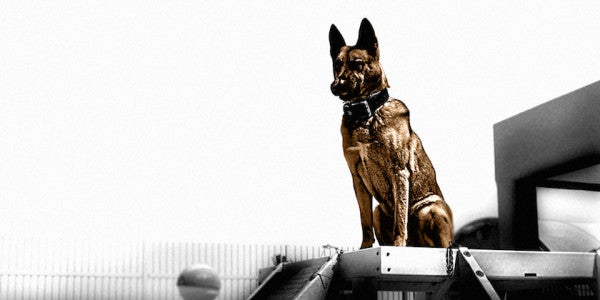 There are a million ways to be killed or wounded on the modern battlefield: bullets, bombs, drone strikes, a tomahawk-wielding SEAL Team 6 operator. But dogs? For jihadists squaring off with Western forces in the Middle East, the threat is real, and a group of ISIS militants learned that lesson the hard way when they recently ambushed a group of elite British commandos with the Special Air Service in Iraq. And they (or their corpses) have the bite wounds to prove it.

The incident purportedly took place in northern Iraq, not far from the ISIS stronghold of Mosul, and near the village where an American Navy SEAL was killed in battle on May 3. According to the British paper, Daily Star Sunday, a small team of SAS commandos were en route back to their base when one of their four vehicles was struck by a roadside bomb. The troops were immediately encircled by about 50 ISIS militants, who were armed with a pair of machine gun-mounted Toyotas.

Taking fire from three directions, the commandos dismounted their vehicles and scrambled for cover. A fierce firefight ensued, and the Brits feared they were being overrun. We’re assuming the jihadists were not expecting what happened next. As the battle raged, a U.S. soldier, who was attached to the SAS team, decided to give the enemy a taste of American might — or, shall we say, American bite — in the form of a pissed off German shepherd.

German shepherds — sometimes referred to as “Alsatians” in European countries — are often favored by U.S. military units because they’re intelligent, loyal, and extremely aggressive when need be. This one was no different. As soon as the American unleashed the K-9, the ISIS militants tried to shoot it. They missed. The dog leaped at one of the fighters, ripping into his face and neck, before mangling the arms and legs of another. Both militants turned and fled, screaming.

“[The dog] could sense the tension and had an overpowering urge to protects its handler and the other troops,” a source told Daily Star. “A snarling [German shepherd] running at you is very frightening and probably not something the jihadis had encountered. The dog did its job and returned to its handler with its tail wagging.”

The SAS commandos and their American ally had apparently just completed a 10-day training course with Kurdish peshmerga soldiers when the ambush occurred. The battle, which, according to Daily Star Sunday, took place last month, concluded how most skirmishes between Western forces and ISIS militants do these days: with U.S. fighter jets swooping in to bomb the terrorists to smithereens. No British or American casualties were reported, human or canine.