Several days after Army Spc. Andrew Brown and his military working dog, Rocky, were injured in an improvised explosive device... 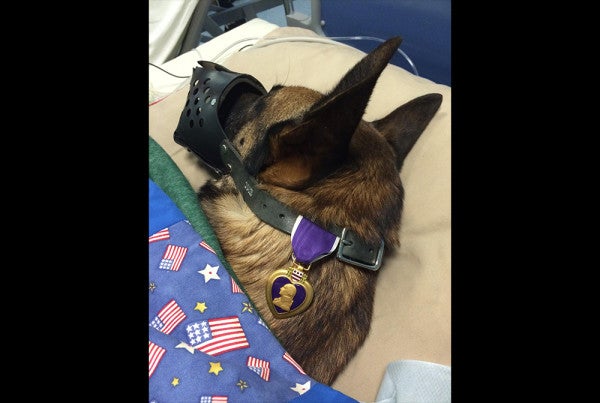 Several days after Army Spc. Andrew Brown and his military working dog, Rocky, were injured in an improvised explosive device on Dec. 3, a photo of Rocky wearing a Purple Heart Medal went viral. While it’s unclear who placed the award on Rocky, since the photo was uploaded to their unit’s Facebook page on Dec. 9, it has been shared more than 134,000 times and has more than 99,000 likes.

“The Army typically does not process awards for our working dogs the same way we do for our other soldiers,” wrote Sgt. 1st Class Michael Garrett, 89th Military Police Brigade public affairs officer in an email to the Killeen Daily Herald. “The Purple Heart in the photo was placed on Rocky as a sign of respect and solidarity between him and Brown during their recovery.”

The two were working with special operations forces when they were injured searching a structure for explosives. Afterward, Brown and Rocky were transported to a hospital in Germany for treatment, reports the Killeen Daily Herald. The strike inflicted shrapnel wounds on both, and also resulted in a broken leg for Rocky.

The 22-year-old Brown is originally from Eliot, Maine, and was treated for non-life threatening injuries, though he will undergo tests for traumatic brain injury, a routine process for soldiers injured in an explosion. Brown and Rocky have been partners for two years and deployed from Fort Hood, Texas, to Afghanistan this October.

Brown, a husband and father of two is now at Walter Reed Army Medical Center in Washington, D.C., according to ABC News. On Dec. 11, the brigade’s Facebook page uploaded a photo of Brown and Rocky on a hospital bed. According to the post, Brown arrived at Walter Reed early that morning and Rocky is expected to return to Fort Hood in the coming weeks.

Brown explained to ABC News that Rocky is considered a soldier and pointed out that a military working dog’s rank is one above his or her handler’s.

“He does everything,” said Brown. “I'm just really a guy with a leash. I bring him to the area and let him do his thing. If he responds, I translate that … let them know my dog got a response right here. … I know the way he works, I know his change of behavior.”

Brown told ABC News that he is hopeful he will reunite with his partner soon, adding that he’s confident Rocky “has high spirits like I do,” and that “dogs are just resilient like that.”