So, you’ve earned yourself a few weeks leave and you’re gearing up for a sweet, sweet respite from your grueling... 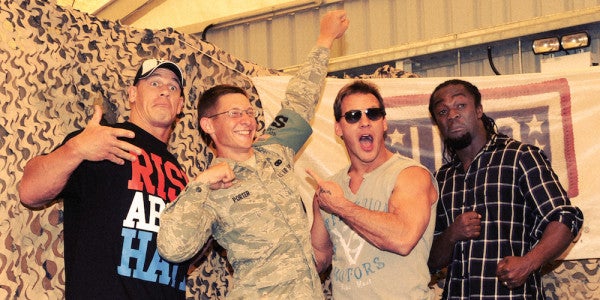 So, you’ve earned yourself a few weeks leave and you’re gearing up for a sweet, sweet respite from your grueling days in uniform. There’s just one problem: You’re a member of the U.S. armed forces, which means your pay is as scarce as your free time.

But traveling on a budget doesn’t mean you can’t travel like a rock star, even if that means no private jet. Sometimes, it just means saving your hard-earned dough so you can spend it when you actually get to where you’re going. You worked hard for your money; it should work hard for you.

Luckily, there’s an ocean of tips, tricks, and hacks designed to help you stretch the value of your dollar — and, hopefully, get the most out of your leave — despite the suffocating constraints of a military salary.

The Armed Forces Vacation Club, that is. Open to all active duty, guard, reserve and retired military personnel, the free AFVC offers a spate of basic rental options around the world. Among the most popular deals: the $349-a-week “Space Available” stays across the country that offer flexible options for service members and their families.

If the traditional Space-A search isn’t your style, consider a more modern approach like AirBnb, which is often perfect for families stationed overseas with limited travel options (and even those simply PCSing). While the company doesn’t offer an official military discount, the individual renters often do — all you have to do is ask. And if that doesn’t work, there’s always the Hail Mary of scanning military family Facebook groups like SpaceATheWorld for a potential opportunity.

Under the sprawling hotel and leisure company’s umbrella of travel brands, the Expedia Military Offer provides complimentary Expedia+ Gold Status to active duty, veterans, military spouses, and their dependents who sign up. With a $10,000 value, Expedia + Gold Status includes perks like complimentary room upgrades and exclusive hotel amenities, 30% more bonus points for your bookings, a member's rate of an additional 10% off certain hotels, and access to exclusive travel offers, setting you up to get that VIP treatment you deserve on your next vacation.

3. Don’t forget to pick up the phone!

Believe it or not, the Department of Defense occasionally attempts to make the lives of service members and their families a little less stressful. That’s where the branch’s Morale, Welfare and Recreation office comes in: Outside of providing facilities on various military installations around the world, from gyms and pools to golf courses and resorts, they also make sure you get the most bang for your buck when you’re off-base.

Each branch’s Information, Tickets and Travel website contains not just a list of group tours and local base ticket offices for the more domestic R&R;, but a treasure trove of special deals and discounts geared toward military families and veterans looking to get away for a few days. A few handy morsels:

The Army’s Leisure Travel Office offers travel and lodging discounts for soldiers stationed at every base in the country. Plus, the Army’s MRW branch also contains separate offices for the Navy and Marine Corps, just in case they get lost.

The Navy’s office points military families to an exclusive military vacation package through Universal Orlando, including not just a three-night, four-day stay at the theme park’s hotel and attractions, but early admission to the resort’s most popular amusements — including The Wizarding World of Harry Potter — to stash your kids for a few minutes.

The Corps’ own Recreation, Information, Tickets, and Tours office contains a handy cheat sheet of military and veterans discounts to movie theater chains like AMC and Regal Cinemas, speedways, zoos and amusement parks a both stone’s throw from from Marine Corp Base Quantico in Virginia and beyond.

The Air Force’s ITT office is, ironically, ocean-heavy: The top events and promotions listed in August include up to 10% off family vacations to beachy wonderlands like Jamaica and significant discounts on Carnival’s 23 cruise ships.

4. … and not just your local leisure office.

If it’s part of the federal government, there’s probably a military and veterans discount on the website somewhere. Case in point: The National Parks Service offers a free annual pass to all active-duty and reserve military personnel and their families — and while it doesn’t cover little things like camping and boating fees, the pass is a fine way to save $80 on access to the 2,000 federal recreation sites around the country.

5. Have your papers in order.

Most of the time, a military ID and a winning smile will get a single service member access to every spider hole in United States, but that’s not always the case when you’re lugging a family and a handful of kids in tow. SpaceA.net, a free, volunteer-maintained search engine of all Space-A locations in the United States and beyond, offers an A+ guide to flight preparation. Chances are you’ll not only need your Uniformed Services ID, but also leave or EML forms for everyone in your travel party.

Just in case, take photos or carry physical copies of all your travel documents. Worst-case scenario: If your room is burgled, you’ll have a better chance of resolving the disruption to your break — and more time to pummel the perpetrator into a red pulp. If you want to avoid the hassle, keep them on your person at all times with a fanny pack: If The Rock can pull it off, so can you.

The airport lounge can be an oasis of solitude amid the harsh banality of the human condition, and most airlines offer up access to military personnel in uniform or bearing orders while in civilian garb. Offers vary based on airline, but United Airlines offers active-duty service members access to its United Club facilities, while American Airlines touts free access to Admirals Clubs (With shower suites! Shower! At the airport!) to personnel and immediate family.

There’s always the exclusive lounges maintained by USO and other volunteers just for service members, replete with free wi-fi, drinks, and snacks — and, in some other U.S. locations, access agreements with other lounges. Plus, there are USO lounges in Germany, Italy, Japan, Korea, and several Middle Eastern countries — oases of familiar faces in the chaos of foreign airports.

No matter what service and discount you utilize, be sure to put the cost on a rewards card if you can. If you’re going to save, you might as well try to earn in the process.