Editor’s Note: This article by Regina Lizik originally appeared on BarkPost, a publication that helps dogs share their stories with... 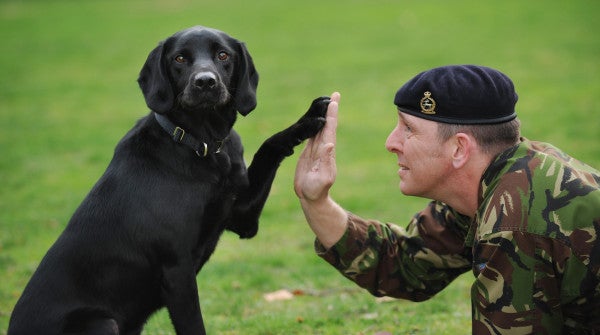 Editor’s Note: This article by Regina Lizik originally appeared on BarkPost, a publication that helps dogs share their stories with the world.

Treo, a Black Labrador Retriever–English Springer Spaniel mix, is one of the most famous military dogs to have fought the Taliban. Working with his handler, Sgt. Dave Heyhoe, the pup’s job was to detect explosives in Helmand province, Afghanistan. Expertly trained by Britain’s Royal Army Veterinary Corps, Treo’s detection skills saved dozens of lives. He was so good at his job that the Taliban had a name for him: “the Black dog.”

The brave canine soldier retired in 2009 and received the Dickin Medal for Gallantry, which is awarded to animals in the United Kingdom for gallantry in war, two years later.

Treo spent the rest of his days with Heyhoe’s family, which includes three children.

In 2015, Treo died at the age of 14. His death left his family devastated. Heyhoe told the Daily Mail:

People might think it’s strange, but Treo was like a son to me, and his death his knocked me for six. Over the years we have seen gunfire, death and bomb scares together – I’ve been lost without him.

(“Knocked me for six” is British slang for being overwhelmed with emotion.)

Completely at a loss without his best friend, Heyhoe thought of the most beautiful way to keep Treo with him forever. He tattooed the pup’s ashes on his leg.

The tattoo artist sprinkled Treo’s ashes into the ink prior to beginning the tattoo. Treo really will be with Heyhoe forever. He is literally a part of him now.

The tattoo is a paw print above a touching poem written from Treo’s perspective. The poem reads:

I will lay down my life for you and

expect nothing but love in return.

I protect my Dad with my life, and

would gladly take a bullet in his place.

I find weapons and bombs.

I am the first sent in and

sometimes the last to leave.

I am the nose and ears of my Dad

I protect and serve him.

I would die for him and for you.

I only ask for compassion

and a kind word.

The words perfectly capture the heart of every military dog. They risk their lives for us and ask for so little in return. Heyhoe’s tattoo is a beautiful tribute to that dedication and bravery.

Watch this video of Heyhoe and Treo together below:

This article, “Veteran Finds The Most Beautiful Way To Keep His Fallen Military Dog With Him Forever,” originally appeared on BarkPost.