“Look, I made a thermite launcher!” cackles inventor Colin Furze as he demonstrates his most recent invention in a March... 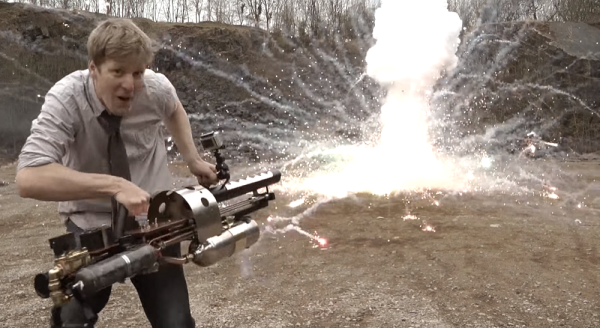 “Look, I made a thermite launcher!” cackles inventor Colin Furze as he demonstrates his most recent invention in a March 31 YouTube video.

While you normally have to emplace the compound, or toss a thermite grenade at a target, Furze decided to take it a step further and create a cannon that lobs homemade thermite shells. Thermite is an incendiary mixture of metal powder fuel and metal oxide that when ignited burns hot enough to melt through metal.

The cannon looks like a steampunk grenade launcher with pistons a bunch of switches and a canister of air to power the weapon system.

Related: Watch these guys set off a ‘mortar’ in their garage »

Earlier videos demonstrate how Furze built the launcher and the shells, but the recent video shows him testing the finished cannon out on a wide range of targets, from a pile of fireworks to a jug of petrol.

A former plumber, Furze now creates inventions to display on his YouTube channel. His creations range from retractable claws, modeled after the Marvel X-Man Wolverine, to an incredibly unsafe jet bike.

He also uploads videos of his occasional mishaps, like the time he burned the hell out of his arm, resulting in a blister the size of an orange and layers of lost skin.

Watch Colin Furze show off his thermite launcher in the video below.