This Liquid Nitrogen Blaster Is Insanely Dangerous, But Awesome

Ever wanted X-Men-like super powers, but without the pesky genetic mutation? Look no further. “I’m gonna turn into Ice Man... 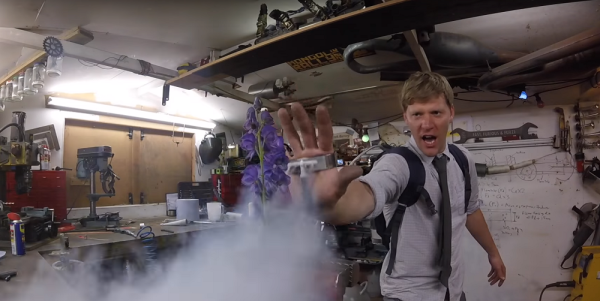 Ever wanted X-Men-like super powers, but without the pesky genetic mutation?

“I’m gonna turn into Ice Man and freeze stuff by chucking liquid nitrogen, from the palm of my hand,” announces inventor and YouTube personality Colin Furze in his latest video.

The former plumber turned inventor transformed a pile of tubing, cylinders, valves and a vat of liquid nitrogen into a rig that lets him hurl frost at a target, turning just about anything into an icicle. Furze doesn’t wear gloves while using the blaster, which is a bit crazy because liquid nitrogen is extremely cold, like -321 degrees fahrenheit cold.

In the video, Furze demonstrates the blaster’s effect on a glass of ice water, a mannequin's head, and performs some unorthodox pruning on a houseplant.

The blaster is Furze’s fourth creation made to mimic a Marvel character’s super powers. Some of the others include Wolverine-like retractable claws, and a wrist-mounted flamethrower that duplicates Pyro’s fireball hurling abilities.

While he can certainly freeze things with his newest invention, it’s unlikely that he will be turning adversaries into ice sculptures anytime soon. However, Furze has mastered making ice cream, so there’s that.

Check out the video of Furze’s liquid nitrogen blasters below.