The bald eagle is the national bird symbol of the United States for good reason. It’s powerful, independent, and utterly... 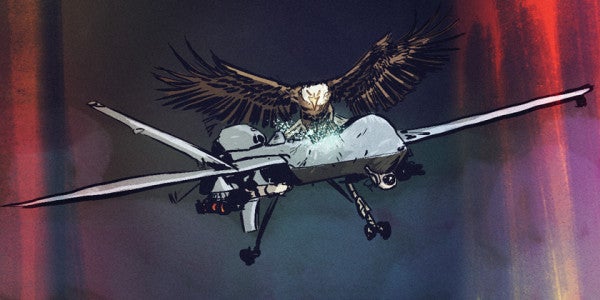 The bald eagle is the national bird symbol of the United States for good reason. It’s powerful, independent, and utterly fearless — like an American with wings. So it’s no wonder our friends and former World War II allies over in the Netherlands are deploying this majestic bird of prey to the front lines in the escalating war on drones.

That’s right: As the use of recreational drones continues to surge, Dutch police are joining forces with a company called Guard from Above, which trains bald eagles to rip rogue drones out of the sky, according to CNN.

Primitive as it seems, the technique has so far proven to be the most promising solution to a problem that continues to perplex authorities around the world, including right here in the United States, where the Federal Aviation Administration recently announced that it was testing anti-drone technology after a study found there were 327 incidents of drones coming within 500 feet of manned aircraft between December 2013 and September 2015.

Related: Rise of unmanned aircraft raises questions about the need for pilots >>

In a media release, Guard From Above co-founder Ben de Keizer said, “Two of the most impressive characteristics of birds of prey are their speed and their power.”

Tell us something we don’t know.

So how does one train a bird to seek and destroy its robotic counterpart? Well, it turns out, bald eagles aren’t as smart as they look. In an interview with The Associated Press, Dennis Janus of the Dutch national police explained that the birds are tricked into thinking that the “drones are their prey” and are rewarded when they catch one.

Check out this bald beast in action.