Mind-Controlled Drones Are Now Real, And They Could Transform The Battlefield

On April 16, the University of Florida held the world’s firstmind-controlled drone race, the latest signifier of this field’s rapid... 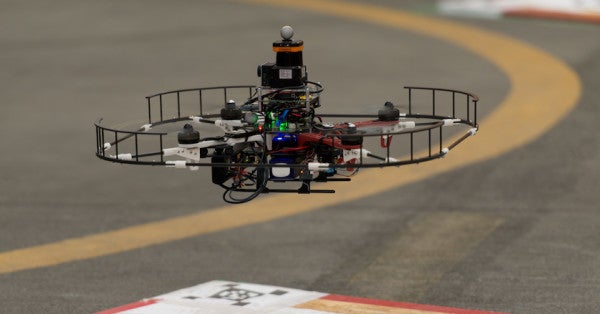 On April 16, the University of Florida held the world’s firstmind-controlled drone race, the latest signifier of this field’s rapid technological ascension. Although the drones only competed along a 10-yard course, the fact remains: These machines were commanded by human brainpower — or in technical terms, brain-computer interface.

The science behind BCI allows humans to manipulate machines with their thoughts by translating the brain’s electrical activity into code that drones can understand. The tool used to map and track this neuroelectric activity is called an electroencephalogram, or EEG, headset. These headsets are fine-tuned to identify the location and frequency of electrical activity linked with specific thoughts in the brain.

Related: Meet The New Mavericks: An Inside Look At America’s Drone Training Program »

In practice, it’s not as complicated as it sounds. Let’s pretend you’re wearing the headset and your objective is to move a drone across a room using your imagination. When you are picturing this machine moving, neurons fire in specific sections of your brain. The EEG headset will recognize this activity and provide signals that can be translated into code. This code essentially “speaks” to the drone in its technical language and commands it how and where to move — like a remote control tells your television to change the channel, or turn on and off.

Now, take a moment to ponder what impact these developments could have on the modern battlefield. Once the technology is battle-ready, which may be soon, soldiers will have a significantly enhanced ability to execute the crucial split-second decisions that arise in combat. And it doesn’t have to stop at drones either: From tanks to planes to even weaponry, all could eventually be controlled by the thoughts of a specialized soldier.

If this sounds farfetched to you, be advised: DARPA has been developing mind-controlled drone technology for several years now, andthe Russians are doing the same. But until the global BCI arms race begins in earnest, the technology will have a far more immediate impact on injured veterans returning home from war.

Neuroelectric technology has already made serious headway in the medical field over the past few years, providing aid to people with physical or mental disabilities in the form of mind-controlled robots like thetelepresence robot. Using similar neuroelectric technology as the EEG headset, these machines are equipped with infrared sensors and cameras and move around based on the user’s brain waves. Scientists are also working to develop artificial limbsthat can be “told” to move by the brain like a normal arm or leg would, an ideal tool for amputees or people with limited range of mobility.

Considering the possibilities this expanding field presents, both on and off the battlefield, it’s difficult to imagine it experiencing any dwindling support. And with governments and medical entities lining up to fund the next big thing in neuroelectric technology, we have plenty of reasons to believe the wait won’t be long.