Soldiers Could Be Riding Hoverboards Into Battle Sooner Than You Think

If we told you soldiers of the future will ride hoverboards into combat, you’d probably say, “Well, yeah, duh.” But... 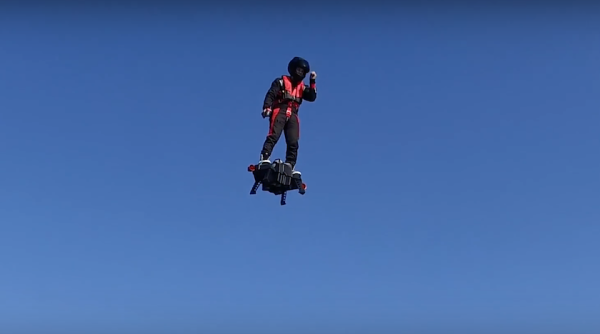 If we told you soldiers of the future will ride hoverboards into combat, you’d probably say, “Well, yeah, duh.” But what if we said it could happen in the next few years? Now we’re talking.

On April 9, Zapata Racing, a French company known best for combining futuristic technology with extreme sports products, unveiled its latest mind-blowing creation: the Flyboard Air, a real-life hoverboard. As in, an actual “Back To The Future”-inspired hovering platform that you can ride through the air like Marty McFly.

Unlike Zapata’s previous bestseller,the Flyboard, the Air doesn’t have hoses propelling it skyward and is not a water jet pack. According to Zapata, it can fly as high as 10,000 feet, exceed speeds of 90 miles per hour, and travel without issue for 10 minutes at a time. It’s a complex, remote-controlled system fueled by six turbo engines and stabilized by drone-like flight algorithms — an impressive combination of brain and brawn.

There are still several important things to note here, though. For one, riding this thing clearly isn’t a walk in the park. Franky Zapata is a French jet ski champion, and he claims to have practiced for over 50 hours before filming that video. Secondly, Zapata is wearing jet fuel on his back, meaning a soldier risks becoming a human firework if he rode the Air into combat. Simply put, as technologically advanced as it is, the Flyboard Air isn’t military-ready yet.

But it could be soon. Zapata revealed his desire to produce a more user-friendly and military-capable Flyboard Air in a recent interview with The Verge:

“[We’ve] finished the research and development on a new project that will use but it will be much easier for the general public, and also certainly for the army, or for security.”

Zapata Racing clearly sees big things on the horizon as it continues to push the limits of human flight. Though the company hasn’t provided a specific timeframe, it claims to be developing a machine that would allow its rider to sit rather than stand, providing far more stability and fluidity than the Flyboard Air.

So, while this likely means our troops won’t be sky surfing on these boards in 2016, the fact remains: Human flight technology is quickly becoming more sophisticated by the day, and it’s only a matter of time before these hoverboards appear on the battlefield. Just imagine a team of Flyboard Air-mounted Delta Force operators flying into combat like a bunch of Green Goblins. It’s the stuff of nightmares.