On Sunday, French President Emmanuel Macron shared an unusual video showing a man on a flying platform — widely characterized as a "hoverboard" — maneuvering through the skies above the Bastille Day celebrations in Paris armed with what appears to be a dummy firearms 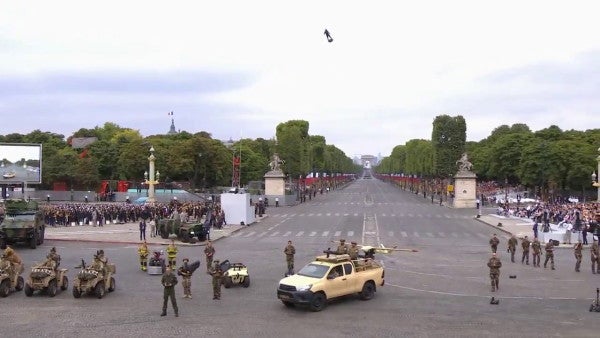 U.S. Special Operations Command may be on the verge of making the dream of flying infantry soldiers a reality, but the French may very well beat them to it.

On Sunday, French President Emmanuel Macron shared an unusual video showing a man on a flying platform — widely characterized as a “hoverboard” — maneuvering through the skies above the Bastille Day celebrations in Paris armed with what appears to be a dummy firearm.

The video was accompanied with a simple message of “Fier de notre armée, moderne et innovante,” which translates to “proud of our army, modern and innovative,” suggesting that the French Armed Forces may be eyeing the unusual vehicle for potential military applications.

Professional pilot Franky Zapata demonstrates a flight on a 'flyboard', which the French army is considering using for military purposes, during the annual Bastille Day military parade on the Champs Elysees avenue in Paris, France, 14 July 2019(Assoociated Press/SIPA/Pierre Villard)

The “soldier” of the craft, however, wasn't French military: According to France24, the pilot was former watercraft racer turned inventor named Franky Zapata, operating his gas turbine-powered “Flyboard Air,” a hoverboard-style vehicle that his company Zapata Racing claims can allow flight up to an altitude of 10,000 feet with a top speed of 93 mph.

It's unclear what, if any, formal relationship exists between Zapata Racing and the French Armed Forces, but Zapata has long expressed a desire to further develop the platform for potential military applications.

“[We've] finished the research and development on a new project that will use but it will be much easier for the general public, and also certainly for the army, or for security,” Zapata told the Verge in a 2016 interview.

The Bastille Day demonstration doesn't necessarily mean the French are going to leave the United States in the dust when it comes to the one-man flight race. In 2016, Zapata sold Zapata Racing to defense contractor Implant Sciences; the following year, he conducted demonstrations with the Flyboard Air for Army officials.

“The contacts [Implant Sciences] have with the U.S. Army was something very exciting for me,” Zapata told Digital Trends at the time. “We have the technology, but having access to those contacts was very valuable to us. The money they will bring to the company also means that we'll be able to develop a . Those two reasons are why we chose to team with them.”

Interest in the platform hasn't waned in the intervening years. In late 2018, SOCOM-funded public-private partnership SOFWERX conducted tests of the so-called Individual Aerial Mobility System (IAMS) built on Zapata's EZ-Fly aerial platform. According to The War Zone, the company had even sought additional employees with special operations backgrounds to assist Zapata in “crafting the militarized derivative” of the Flyboard Air.

“SOFWERX … developed and tested a training protocol to determine its efficacy for SOF operators, and to determine how quickly they could be trained to pilot the EZ-Fly,” the organization said of the IAMS program at the time. “The trainees performed advanced skills assessments and were able to successfully pilot the EZ-Fly through a slalom course with three weeks of total training.”

Of course, the Bastille Day demonstration doesn't necessarily mean the Zapata rig is fully militarized and ready to rumble. As The War Zone noted back in 2018, the technology is far from perfect in both design and application:

Unless operators fly a loop from a base and back, they would have to carry extra jet fuel to fly it back out again, as well. The prospective unit cost of around $250,000 is around half that of small, purpose-built 4×4 light special operations vehicles, but it's still unlikely that any U.S. military service would consider the Fly-EZ a disposable system. That price point also raises questions about how cost effective it would be to equip even small units with these individual flying platforms – just kitting out a single nine-man Army infantry squad would cost more than $2 million.

On top of all that, as with earlier designs, Fly-EZ continues to leave the operator entirely exposed to enemy fire and it's not clear if the user can fire a weapon, even one-handed, while flying. Its speed, maneuverability, and altitude capabilities would help mitigate this vulnerability, but videos of the testing show that the platform is moving relatively slowly when it takes off or comes in to land. It's loud, as well, largely ruling out covert insertions into denied areas or discreet operations at night.

Maybe that's a good thing. I mean, we all know how the Pentagon's last (fictional) flyboard turned out: