A top NATO general met with his Russian counterpart. The photo couldn’t be more awkward

NATO and Russia seem to be at that stage of a doomed marriage where a couple is still talking but only in short statements that are solely about the kids. 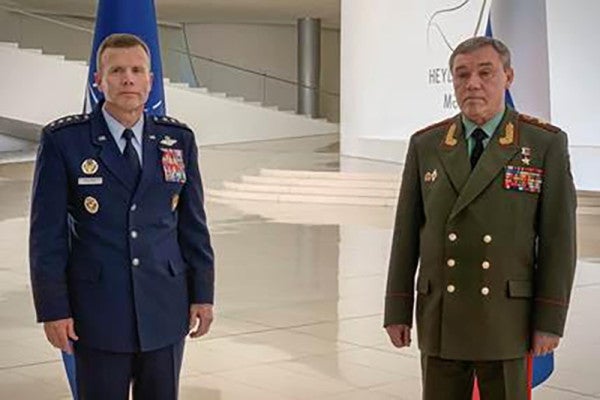 NATO and Russia seem to be at that stage of a doomed marriage where a couple is still talking but only in short statements that are solely about the kids.

Why would I say that, you ask? Well…

On first look, it seems like this is a photo of Wolters that is split near the middle, then opposite is a different photo of Gerasimov. But nope, that's all in one frame, where they are definitely that far apart.

And clearly their facial expressions indicate that they are just as excited to be in each other's presence as Batman and the Joker. Although perhaps this is all the fault of a photographer who didn't say cheese.

“NATO's Supreme Allied Commander and the Russian Chief of the General Staff exchanged views on their respective military activities and exercises. The two military leaders use this channel of communication to promote military predictability and transparency,” the press release from NATO said.

“Today's meeting reflects the priority NATO accords to transparency and predictability, and demonstrates a commitment to use this important channel of communication between NATO and Russian military authorities for this purpose.”

What today's meeting really reflects, however, is that a photo of a NATO and Russian general simultaneously playing nice while hating each other's guts makes the perfect format for a meme.