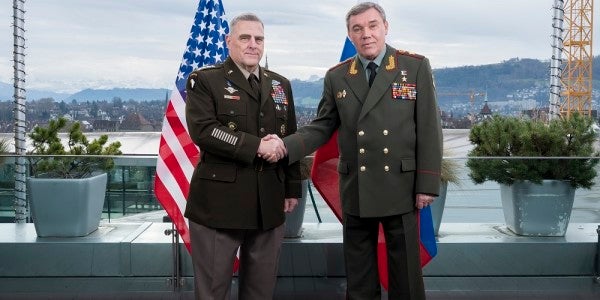 Army Gen. Mark Milley, chairman of the Joint Chiefs of Staff, just met his Russian counterpart for the first time, and their body language makes clear relations between the two countries remain in the Siberian winter of discontent.

The Defense Department on Wednesday released a picture of Milley and Russian Army Gen. Valery Gerasimov sharing an awkward handshake in Switzerland. It's hard to tell which general doesn't want to be there the most.

Milley makes a heroic effort to turn his trademark scowl upside down into something close to a smile. Gerasimov bears a striking resemblance to James Bond's Soviet adversary in the 1983 film Octopussy.

This is the second awkward photo of Gerasimov and an American general officer this year. In June, the Russian general met with Air Force Gen. Tod Wolters, head of NATO, in Azerbaijan. Both men look as if they have just been sentenced to life in a Gulag.

If blank stares could kill, Gerasimov and Wolters would have been deadlier than Stalin.