Fort Knox is a great place to live with a ton of things to do in the area. The installation... 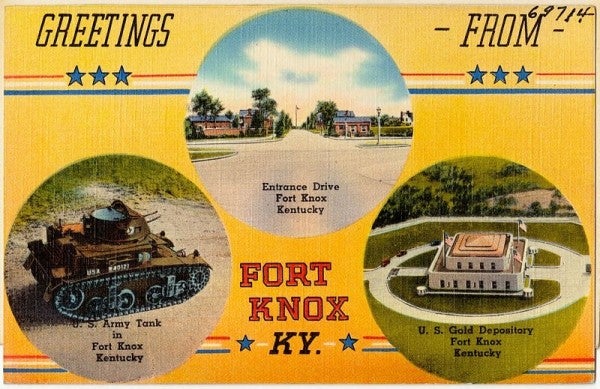 Fort Knox is a great place to live with a ton of things to do in the area. The installation may be on the small side, but it has very important missions for the Army, including being home to Cadet Command and the Human Resources Command.

Fort Knox features the United States Bullion Depository, with rumors flying about what’s really inside. The phrase “Gold Standard” is used to describe the installation in reference to the landmark, including their local post newspaper, The Gold Standard. The installation is over 100,000 acres and located in three of Kentucky’s counties. Fort Knox is full of history, as the General Patton Museum on-post features information on Cadet Command, the installation, and Patton himself. Now let’s dive into your new duty station then head over to PCSgrades.com to read reviews from other mil-fams for base housing, REALTORS, moving companies, and more.

Fort Knox Soldiers and their families live on-post in various neighborhoods and apartment complexes. However, for those eligible to live off-post, most families elect to live in Radcliff or Elizabethtown. Elizabethtown is usually the top choice, though further from post, as it offers a local mall, a small town square, local and nationally recognized restaurants, and multiple plazas. For those open to a commute, some Soldiers opt to live in Louisville. There are a ton of carpool options for Soldiers and DA Civilians that work on post and live in Louisville.

Fort Knox on base housing is managed by Winn Companies and consists of 2, 3, and 4 bedroom floor-plans. The housing is pet friendly and there are multiple playgrounds and a splash park. On PCSgrades.com an Army spouse says “We loved living in the Clarke neighborhood. The homes were older but nicely maintained.” Read the full review of Fort Knox Housinghere.

Fort Knox has a ton of amenities as well, including an on-post mini waterpark, putt-putt golf course, and bowling alley. There are also four schools, with over 1,500 students. Fort Knox has a commissary, PX, and military clothing and sales store too. The installation also has two hotels on post and a wide-range of food options, including Samuel Adams Brewhouse, Taco Bell, Burger King, Starbucks, Subway, and much more.

There are some nice neighborhoods near post and Elizabethtown is only 15 minutes away though with traffic it can be more like 30. Brandenburg and Vine Grove are both popular places to live and Doe Valley is a exceptionally great gated community with a lot of great amenities such as a golf course, camp ground, lake, and marina.

The best part about the Fort Knox area is the low cost of living. A two-bedroom apartment in the area can cost around $600-$700, depending on where you decide to live. Houses can be rented for very little and the cost of buying a home is very reasonable. Need some help deciding whether to rent or buy? Let us help you weigh your options.

I grew up in the Fort Drum region, so I thought moving to Fort Knox and so far away from home to “the south” would mean warmth! I was very wrong! We have a saying in Kentucky where if you don’t like the weather, just wait 15 minutes. That is very true here. For one, the rain in Kentucky is insane. It doesn’t usually last long, especially in the summer, but it’s a downpour compared to back home. While it doesn’t snow as much here, it does get very very cold (don’t throw away your winter coat like I did for this move !). In December or January, you’re seeing lows on average around 27 to 30 degrees, although I woke up most mornings to about 17 or 18 degrees. It’s not very consistent, however, as one Christmas here was in the 70s! In June and July, the highs are on average around 85 to 90 degrees. Spring and fall in Fort Knox are normally nice, with outdoor patios opening back up around late March or early April. The thing I’ve learned about the weather in Kentucky is that it’s hard to predict, so be prepared for anything!

Kentucky Derby is in May. This is a huge event for the Fort Knox region and a big tradition. Many have “watching parties” at their homes to avoid the crowds or attend the Derby themselves. Thunder Over Louisville is at the beginning of the celebrations, with a huge firework show over the city. The weeks leading up to Derby also include a hot air balloon event, half marathons, a steamboat race down the river, and a parade.

Kentucky State Fair – Louisville, Kentucky in August. The Kentucky fair has concerts, fair rides, and a ton of vendors indoors to escape the heat!

Kentucky Bourbon Festival – Bardstown, Kentucky in September. This festival is a local favorite, but attended by the stars! You never know who you might see!

James Court Art Show – Louisville, Kentucky in October. This is a great event if you enjoy art!

The Hot Brown, an open-faced sandwich, was invented at the historic Brown Hotel in downtown Louisville. The sandwich is famous in the region and around the country.

Bourbon is a huge part of Kentucky. Louisville and the surrounding cities are filled with distilleries and bourbon tours. The Bourbon Trail is a must if you’re interested in the history of bourbon in the state.

Louisville is located approximately 45 minutes away from Fort Knox. It is the place to go on the weekends for festivals, concerts, and kid-friendly events.

Nashville is approximately 2.5 hours away from Fort Knox. This country music city makes for a great overnighter or weekend trip. Check out the bars downtown and listen to live music, go on a celebrity home tour, or check out the Grand Ole Opry!

Cincinnati is a family friendly day-trip or quick overnighter. It is home to the Cincinnati Zoo and the Newport Aquarium. Don’t forget to visit the ITR office for discount tickets! Cincinnati is a little over 2 hours away, depending on traffic.

St. Louis is about four hours away from Fort Knox, but offers spectacular adventures for a family weekend get-away. Visit the Gateway Arch or if you travel with your pet (like I do!), bring Fido to The Museum of the Dog, which allows you to bring your dogs into the art museum.

Indianapolis is approximately a 2.5-hour drive from Fort Knox and a great weekend get-away close to home. Visit the Indiana State Fairgrounds during your visit, there is always some sort of event happening there. On your way home (or there!), take a detour to Nashville, Indiana, my favorite American small town for a taste of local flavor.

Fort Duffield is in West Point, Kentucky, approximately 20-minutes from Fort Knox. The Civil War site has a cemetery at the top of the hill, along with log cabins. The fort has reenactments on-location that are worth the visit. The site provides a quick, but rigorous walk to the top and spectacular views. Saunders Springs is located right off one of the Fort Knox gates. It is easy to spot, with log cabins surrounding the entrance. Once on the trails, hikers are taken to a small waterfall and even a cave (not open to the public). Bridges to the Past and Tioga Falls are at the end of a long road just a bit past West Point, Kentucky. Go left and you’ll walk on a paved road over small bridges alongside a creek, called Bridges to the Past. Go right and you’ll hike through the woods leading to a waterfall, called Tioga Falls. This land is owned by Fort Knox and closed at some points, so double check before visiting.

The famous designer of Central Park in New York City, Frederick Law Olmsted, was commissioned to design 18 parks and six parkways in Louisville. Cherokee Park is one that is perfect for walking your dog, a run, or meeting with friends.

Other parks closer to Fort Knox that are worth a visit include Freeman Lake, which offers very inexpensive kayak, canoe, paddle boat, and stand-up paddle board rentals in the warmer months. Also, during summer months, Freeman Lake hosts free outdoor kids movie nights for the community.

Camp Carlson is owned by Fort Knox and located off-post. The 65-acre land is a campground available to the military community, as well as offers fishing and playground areas.

21c Museum and Hotel is an art lover’s paradise. Attached to a hotel, with a bar and restaurant, visitors can walk the museum with their drinks and view artwork on multiple floors. The museum is free and a great date night option.

The Kentucky Derby Museum is a horse racer’s dream. The museum is beautiful with a free tour of the facility, plus some paid behind-the-scenes tours worth the extra cost. They also have an incredible 360-degree video that is absolutely worth the visit.

Frazier History Museum is a small, but interactive museum in Louisville. One wing features the Kentucky Prohibition, while the other is a kid-friendly Lewis and Clark Expedition wing. Lewis and Clark started their journey on the Ohio River, with their starting point only a few miles from the museum.