"In seizing the firm land at the top of these cliffs, they began to seize back the continent of Europe." 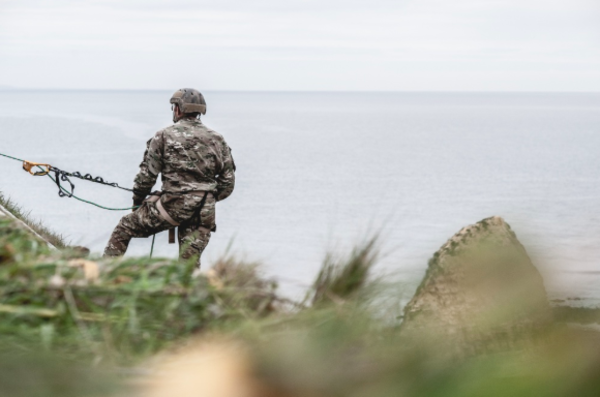 U.S. Army Rangers returned to the site of one of their most storied battles on Wednesday to commemorate the 75th Anniversary of D-Day and scaled the same Normandy cliffs their forebears climbed on June 6, 1944, which changed the trajectory of World War II.

A day before the anniversary of the battle, members of the 75th Ranger Regiment climbed the cliffs at Pointe du Hoc in Normandy, France to “honor the 135 men killed or wounded from the 2nd and 5th Ranger Battalions while capturing and holding” the former German artillery emplacement, according to the Defense Department.

World leaders gathered in England on Wednesday, also to pay tribute to those involved in “what is still the largest naval, air and land operation in history,” the Washington Post reports. Queen Elizabeth II addressed the crowd of the ceremony, saying on “behalf of the entire country — indeed the whole free world — that I say to you all, thank you.”

President Ronald Reagan detailed the dangers that Army Rangers faced down that day, at a commemoration ceremony for the 40th anniversary in 1984.

“The Rangers looked up and saw the enemy soldiers at the edge of the cliffs, shooting down at them with machine guns and throwing grenades. And the American Rangers began to climb,” Regan said.

“When one Ranger fell, another would take his place. When one rope was cut, a Ranger would grab another and begin his climb again. They climbed, shot back, and held their footing. Soon, one by one, the Rangers pulled themselves over the top, and in seizing the firm land at the top of these cliffs, they began to seize back the continent of Europe.”

SEE ALSO: The 4 most dangerous missions heroic US troops carried out on D-Day 75 years ago

WATCH NEXT: Green Berets Parachuted Over Mont Saint-Michel To Honor The 75th Anniversary Of Their Special Forces Predecessors' Arrival In France