With Shanahan’s departure, it’s the Army’s world — and we’re just living in it 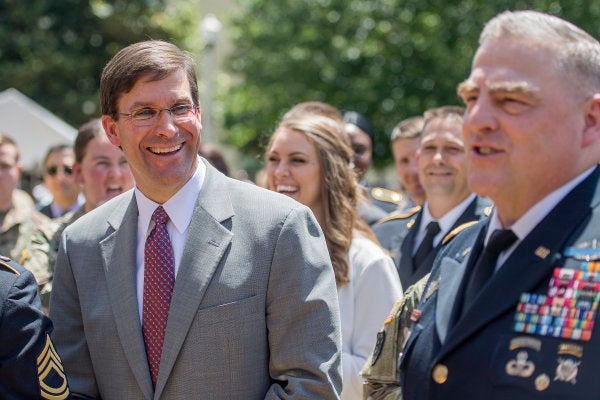 The day of the Army is upon us.

Secretary of the Army Mark Esper will be taking over as Acting Secretary of Defense, President Trump announced on Tuesday, as Patrick Shanahan withdrew his nomination.

The comes just a couple of months after Army Chief of Staff Mark Milley was officially nominated to take over as Chairman of the Joint Chiefs.

An defense official familiar with the matter confirmed to Task & Purpose that Army Undersecretary Ryan McCarthy will “more than likely” become Acting Army Secretary — his second time in that position.

Esper is a West Point graduate, class of 1986, who completed Ranger training and previously served in the Gulf War with the 101st Airborne Division. He retired in 2007 after serving in the Virginia and D.C. National Guard, and Army Reserve.

Since his confirmation as Army Secretary, Esper has leaned heavily into modernizing the force, and focusing on readiness. During his confirmation hearing before the Senate Armed Services Committee, Esper said that his “first priority will be… ensuring the total Army is prepared to fight across the full spectrum of conflict.”

He has extensive political experience, having worked as the national security adviser to Senate Majority Leader Bill Frist, a staff member of the Senate Foreign Relations and Government Affairs Committees, and the policy director for the House Armed Services Committee.

Esper is also a former Raytheon executive, working as a lobbyist for the defense contractor from 2010 to 2017.

Citizens for Responsibility and Ethics in Washington (CREW), which spurred the ethics investigation into Shanahan's Boeing connections after filing a complaint that he, already has their eyes on Esper, saying in a statement on Tuesday that he risks “being tainted by his previous work” for Raytheon.

“While Esper may not have had sway over these types of deals as Secretary of the Army, as acting Secretary of Defense he will have potential influence over such deals, as well as over the controversial proposed merger of Raytheon and UTC to become the second largest defense company in the U.S.,” CREW Executive Director Noah Bookbinder said in the statement. “His ethics agreement—and his ability to follow it—will be something we will be watching closely.”

Esper's office did not immediately respond to request for comment.

SEE ALSO: Patrick Shanahan Is Out As Acting Defense Secretary