Patrick Shanahan is out as acting defense secretary

Yahoo News reported on Tuesday that Shanahan's FBI background check was holding up the process. 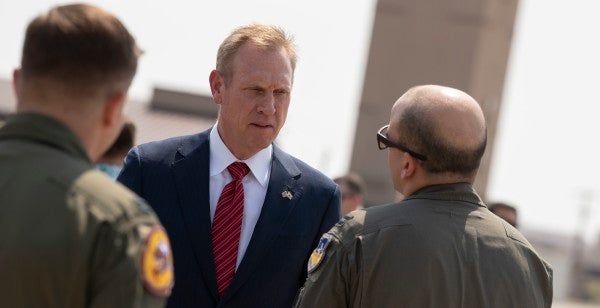 President Donald Trump announced on Tuesday that Acting Defense Secretary Patrick Shanahan will “not to go forward with his confirmation process.”

Acting Secretary of Defense Patrick Shanahan, who has done a wonderful job, has decided not to go forward with his confirmation process so that he can devote more time to his family….

The Washington Post reported on Tuesday that Shanahan decided to step aside because he was worried revelations about past incidents of domestic abuse would hurt his family, especially his son.

Specifically, Shanahan's former wife Kimberley Jordinson beat him in August 2010 and tried to set his clothes on fire, according to the Washington Post. In a separate November 2011 altercation, his son severely injured Jordinson by beating her with a baseball bat.

Jordinson was charged with domestic violence for the first incident, but Shanahan later had the charges dropped, the Washington Post reported.

Shortly after his then-17-year-old son assaulted Jordinson, Shanahan wrote a memo to his former wife's brother arguing that his son had acted in “self-defense,” although he told the Post he now regrets doing so.

Shanahan also arranged to hire a defense team for his son who was ultimately ordered to attend a Florida Sheriff's Youth Ranch for 18 months and given four years of probation – both punishments were reduced, according to the newspaper.

“Bad things can happen to good families,” Shanahan told the Post, adding that discussing his son's assault publicly “will ruin my son's life.”Defense officials were not immediately available for comment.

Trump announced on May 9 he intended to nominate Shanahan, but the Senate never received the nomination. Yahoo News reported on Tuesday that Shanahan's FBI background check was holding up his confirmation process.

Speaking to reporters on Tuesday, Trump said he did not ask Shanahan to withdraw his nomination as defense secretary.

“He walked in this morning and he said it's going to be a rough time for him because of, obviously, what happened,” the president said. “But I did not ask him to withdraw. He presented me with a letter this morning. That was his decision.”

Trump also said he was unaware of the “very unfortunate” allegations of domestic violence raised in the media until Monday. Despite not knowing about the issues with Shanahan's family, Trump asserted the the White House does not have any problems with vetting nominees for cabinet positions.

“As you know, Pat was acting ,” Trump said. “And so, acting gives you much greater flexibility. A lot easier to do things. So that's the way it is. Too bad.”

In a statement on Tuesday, Shanahan said he would welcome serving as defense secretary, “but not at the expense of being a good father.

“After having been confirmed for Deputy Secretary less than two years ago, it is unfortunate that a painful and deeply personal family situation from long ago is being dredged up and painted in an incomplete and therefore misleading way in the course of this process,” Shanahan said.

“I believe my continuing in the confirmation process would force my three children to relive a traumatic chapter in our family's life and reopen wounds we have worked years to heal,” he added. “Ultimately, their safety and well-being is my highest priority.”

UPDATE: This story was updated on June 18 with information from the Washington Post, a statement from Patrick Shanahan, and quotes from President Donald Trump.