Mark Esper will revert back to Army Secretary. Then Navy Secretary Richard Spencer will serve as acting defense secretary until Esper is confirmed. 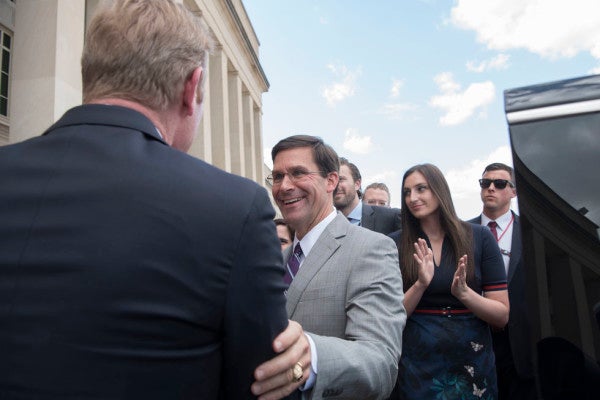 The Pentagon plans to tie itself into a pretzel as the Senate considers Mark Esper's nomination to become the next defense secretary.

“We will not presume confirmation – let me be very clear about that,” Chewning told reporters on Tuesday. “It is the prerogative of the Senate to take as long as they think is necessary to examine and confirm a nominee. So we have prepared Secretary Spencer to remain in the role until we have a confirmed secretary of defense.”

It is unclear when the Senate will actually get Esper's nomination. Chewing said the White House decides when the nomination will go to the Senate adding he expects that to happen “shortly,” but he does not expect the nomination to arrive on Tuesday.

The reason for this do-si-do is the Federal Vacancies Reform Act, which prevents Esper from serving as acting defense secretary while his nomination is under consideration.

The arcane law did not apply to Patrick Shanahan, who served as acting defense secretary from Jan. 1 until he withdrew from consideration in June after media reports indicated he and his son and been involved with violent altercations with his former wife.

When Shanahan dropped out, the Federal Vacancies Act kicked in for Esper. Further complicating matters: The act only allows officials to serve in an acting capacity for 210 days. That timeline started on Jan. 1, so it runs out at the end of July.

However, the 210-day deadline does not apply while the Senate is considering Esper's nomination, Chewning said.

“Effectively, the clock will go on pause while Secretary Esper is being reviewed by the Senate and Secretary Spencer is in the role of acting,” Chewning said. “So he can stay in that status for as long as necessary for the Senate to examine Secretary Esper.”

The quickest the Senate has confirmed a defense secretary in the middle of a president's term is less than a week, Chewning said.

Chewning declined to say what the Pentagon might do if there is a problem with Esper's confirmation and the 210-day timeline runs out.

“If we find ourselves in that scenario, we will come back here and talk to you about what plans we're going to put in place to address that issue,” Chewning said.

But wait, it gets even more complicated.

“There's more flexibility in terms of who we put in to serve as the potential deputy role,” Chewning said. “You could have Secretary Spencer move from his role as acting SECDEF to then become the acting deputy secretary of defense.

“You could go in the next line of succession. It would jump, because we don't have a confirmed secretary of the Air Force, to the first [Office of the Secretary of Defense] person, which would be Ellen Lord. Or, we could just pick someone outside the order of succession.”

SEE ALSO: Warfighting with the backup squad: 20 of the Pentagon's top officials are in temp or acting roles