The Royal Navy is eyeing jetpacks for amphibious assaults, which is a terrible idea 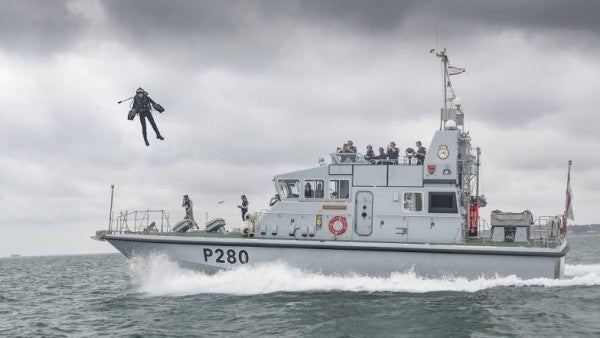 The future of flying soldiers just took one more turbine-assisted leap towards becoming a reality — maybe.

“Being in command of Dasher while the Gravity Industries team were onboard was very different and a new challenge which I was honored to take on,” Lieutenant Lauren Webber said in a statement. “Taking off and landing on the P2000 [Archer-class vessel] look so easy, despite the ship traveling at 20 knots.”

This isn't Browning's first jetpack confab with the Royal Navy. In May, personnel from 539 Assault Squadron, 1 Assault Group Royal Marines (1AGRM) — the training unit responsible for small boat amphibious and riverine operations — tested out the Daedalus jetpack as part of its mission to reimagine the future of amphibious assaults.

“This has been about exploring how we can take surface forward and all the different technologies that are out there,” as 1AGRM's commanding officer Col. Chris Haw told Maritime Executive at the time.

Browning's work with the Royal Navy in the 1AGRM and Dasher suggests a focus on applying jetpack technology to amphibious operations, but the concept has been explored before. While U.S. military planners have long sought personal flight capabilities for warfighters, Bell Aerospace in 1967 proposed a backpack-style Light Mobility Systems jetpack system explicitly for amphibious assaults.

Developed during the height of the Vietnam War, the concept detailed in Bell's LMS proposal was fairly simple: beyond reconnaissance, swarms of jet-powered Marines could flit over enemy beaches, conducting raids on vulnerable positions and even blasting psychological warfare messages. But the fatal shortfall of the system is equally as simple: flying soldiers are easy targets

“In every depiction of the system, flying soldiers are terribly exposed to enemy fire,” as Kyle Mizokami put it in Popular Mechanics in 2018. “Bell did this to show the jetpack's relevance to the battlefield on the ground, but by doing so it emphasized LMS' weakness, showing jetpack soldiers as easy targets silhouetted against a blue sky. In a real war, soldiers with LMS would be the first ones to get shot at, negating any advantage of the platform.”

This problem has only increased since Vietnam as the high costs imposed by the development of advanced anti-access/area denial capabilities and the reduction in naval capabilities have rendered amphibious assaults all but obsolete. Indeed, then-Commandant Gen. Neller stated in 2018 that the U.S. Marine Corps was developing a new concept called Expeditionary Advance Base Operations to adapt to the new era of so-called “great power competition.'

So no, don't expect rocket-powered Marines flooding over enemy beachheads, but Browning's latest test is definitely a major boost for the Daedalus system over other potential competitors: According to Army Recognition, Browning's successful test came one week after Franky Zapata, the French inventor who previously wowed spectators at the Bastille Day celebrations in Paris aboard his Flyboard Air “hoverboard,” failed to cross the English Channel aboard his platform.