American citizen charged with joining ISIS as a sniper

A 43-year-old American man has been indicted on charges he traveled to Syria and joined ISIS as a sniper and weapons trainer. 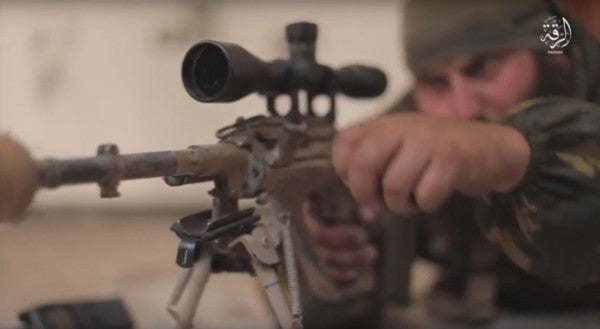 A 43-year-old American man has been indicted on charges he traveled to Syria and joined ISIS as a sniper and weapons trainer.

Ruslan Maratovich Asainov, a naturalized U.S. citizen born in Kazakhstan, left his home in Brooklyn, New York and traveled on a one-way ticket to Istanbul, Turkey in Dec. 2013, according to an indictment filed in federal court on Tuesday.

Asainov, who also went by the nom de guerre of Suleiman Al-Amriki” and “Suleiman Al-Kazakhi,” allegedly then traveled to Syria and joined ISIS as a sniper.

“Over time,” according to a Justice Department press release, “Asainov rose through the ranks to become an ISIS 'emir' in charge of training other ISIS members in the use of weapons. He also attempted to recruit another individual to travel from the United States to Syria to fight for ISIS.”

In March 2015, per the DoJ, Asainov allegedly asked a confidential informant to send him $2,800 so he could buy a rifle scope. He later sent the informant photographs of himself holding the rifle with the scope, DoJ said.

A confidential informant working with the New York Police Department intelligence division had known Asainov since 2008 and began communicating with him in August 2014 after spotting him online, the complaint said.

Asainov tried to recruit the informant to go to Syria and join the ISIS, saying he'd help get him a job, housing, food and $50 a month, according to the complaint. Asainov suggested he bring his family, too, saying “even grandmothers are coming.”

He also allegedly messaged another person that ISIS was “the worst terrorist organization in the world that has ever existed,” and claimed that he wanted to die on the battlefield, according to DoJ.

Asainov was arrested in Syria by members of the U.S.-backed Syrian Democratic Forces and was transferred to FBI custody in July 2019.

He faces a maximum sentence of life in prison and will be arraigned at a later date, DoJ said.