Three senior executives of a defense contracting firm have been indicted over a “massive fraud against the United States” in... 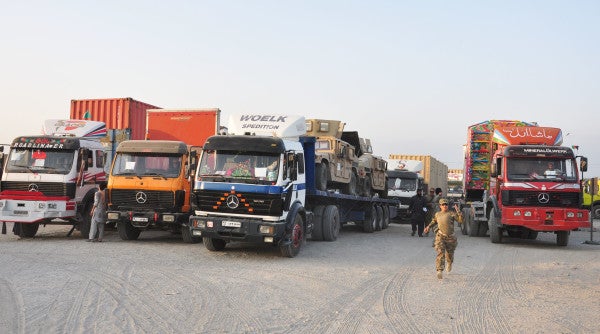 Three senior executives of a defense contracting firm have been indicted over a “massive fraud against the United States” in connection with a contract to supply coalition forces in Afghanistan to the tune of nearly $9 billion, according to The Department of Justice.

Abul Huda Farouki, 75, his brother Mazen Farouki, 73, and Salah Maarouf, 71, allegedly engaged in major fraud, conspiracy to violate the restrictions on doing business with Iran, money laundering, and other charges. All have pleaded not guilty, according to DoJ.

The charges stem from two separate contracts for supplying forces in Afghanistan. The first, known as the Subsistence Prime Vendor – Afghanistan (SPV-A) was an $8 billion contract to build refrigerated and dry goods' warehouses and transport goods there. The second was a $984 million contract called the National Afghan Trucking contract, which was meant to supply trucking services to the U.S. military in Afghanistan.

According to the indictment, however, neither contract was carried out as required. The three men “conspired to cut costs by transporting vehicles through Iran,” the DoJ said, noting that it was a violation of Iran sanctions.

Meanwhile, the warehouses that were supposed to be constructed under the SPV-A contract were “deceptively staged to appear if Anham had made meaningful progress on the completion,” according to the indictment.

The indictment went on to allege that Farouki and other top managers at Anham conspired together to transport construction equipment, generators, empty shipping containers, and more to the site of the proposed warehouse complex at Bagram air base in order to take pictures that would show they were being built. “The staged site then was deconstructed after the photographs had been taken,” the indictment said.

In a statement on its website, Anham said it was “extremely disappointed” in the DoJ's charges against what it described as a former employee, and two employees of companies who served as subcontractors.

“Anham has saved U.S. taxpayers $1.4 billion through its contract to provide food to U.S. troops serving in Afghanistan, and in preparing for that contract it made good faith efforts to meet aggressive construction timelines in one of the most difficult environments in the world,” the statement said. “At no time did Anham's former employee or subcontractors cause any loss to the federal government – the government received exactly what it was promised at the price it was promised, a price significantly below that of Anham's main competitor.”

The statement went on to say the company had self-reported shipments that had gone through Iran and had been cooperating with the DoJ since 2013.

The next hearing in the case is scheduled for Dec. 6 in the District of Columbia.