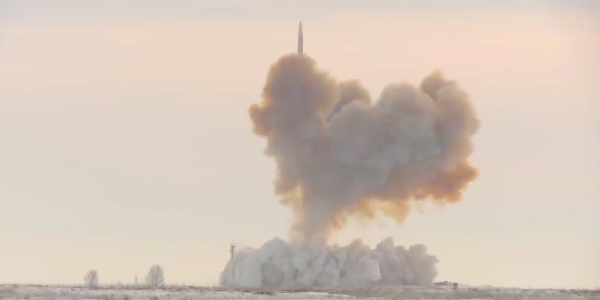 President Vladimir Putin watched the test from the Defense Ministry's control room in Moscow, saying afterward that it was “an excellent New Year's gift to the nation.”

The missile was launched from a testing ground in the southern Ural Mountains and successfully hit a target on Kamchatka in the Far East, some 6,000 kilometers away.

“The Avangard is invulnerable to interception by any existing and prospective missile-defense means of the potential adversary,” Putin said.

He also said the missile would enter service with the Strategic Missile Forces next year.

The Avangard system was one of several advanced weapons systems that Putin presented during his state-of-the-nation speech in March.

At the time he said Russia had developed the weapons because of Washington's efforts to develop U.S. missile-defense capabilities.

Putin said in March that the Avangard has intercontinental ranges and can fly at 20 times the speed of sound.

SEE ALSO: Get Ready For The Era Of Hypersonic Flight — At Five Times The Speed Of Sound

Avangard
How The Other Half Fights
hypersonics
military tech
news