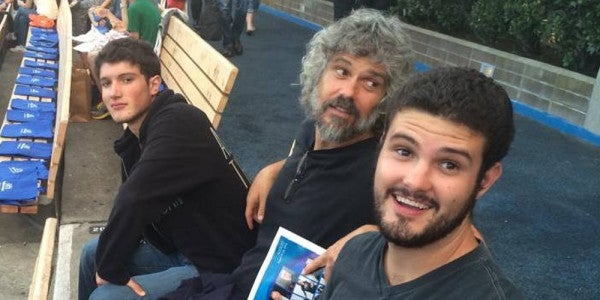 Navy veteran Telemachus Orfanos survived last year’s mass shooting in Las Vegas that killed 59 people, but on Wednesday night he was gunned down in another shooting, this time in Thousand Oaks, California.

Orfanos served as a sonar technician surface seaman from June 2011 until December 2013, according to his official Navy record. After completing his training in anti-submarine warfare, he served aboard the Military Sealift Command ocean surveillance ship USNS Able from April until December 2013.

He left the Navy as an E-3 and his awards include the National Defense Service Medal, Global War on Terrorism Medal, and Pistol Marksmanship Ribbon.

His father Marc told the Washington Post that the younger Orfanos enjoyed going to shooting ranges while in the Navy. When his son moved back with his parents afterward, he asked if he could keep a gun in the house but they said no, Marc Orfanos told the newspaper.

“My take is that if there’s a gun in the house, there’s always a possibility of an accident, or of suicide,” Marc Orfanos said. “It increases the odds.”

Telemachus Orfanos also loved country music, and that is why he was attending the Oct. 1, 2017 Route 91 Harvest Festival in Las Vegas when a gunman opened fire at the crowd, his father told National Public Radio.

Marc Orfanos said his son was traumatized by the shooting, during which he helped carry severely wounded people out of the kill zone, the Washington Post reported.

“I hope to God no one sends me anymore prayers. I want gun control. No more guns!” – mother of shooting victim Telemachus Orfanos. She says he survived the #LasVegasShooting but did not survive the #ThousandOaksMassacre. @ABC7 @ABCNewsLive pic.twitter.com/UMqTY1RATK

Susan Orfanos has made an emotional appeal for gun control legislation in the aftermath of her son’s death.