In the wake of the deadly Oct. 1 shooting at the Route 91 Harvest music festival in Las Vegas, stories... 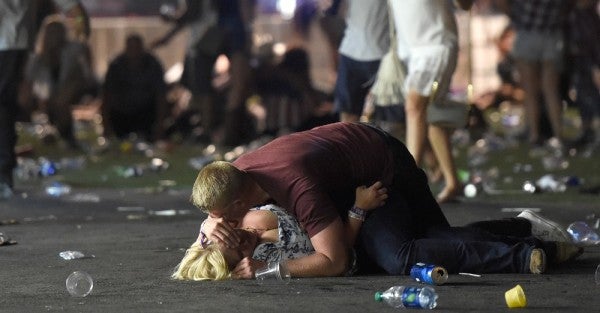 In the wake of the deadly Oct. 1 shooting at the Route 91 Harvest music festival in Las Vegas, stories of individual sacrifice and bravery emerged everywhere: Strangers risked life and limb to aid the wounded; commandeered vehicles to rush them to the hospital; provided life-saving first aid; and, in some cases, shielded others from fire. One such story wasn’t a story at all, just a moving photograph: a man on the ground protecting a woman’s body with his own as the shooting continued around them.

After the photo went viral, the man was identified Oct. 4 as Matthew Cobos, an Army cavalry scout based in Hawaii. Cobos was photographed Sunday night by Getty Images’ David Becker, after gunfire rained down on the crowd of 22,000.

Related: This Marine Vet Stole A Truck And Turned It Into An Ambulance To Rescue Victims During Las Vegas Shooting »

Though Cobos has not spoken publicly about the shooting, the Daily Mail reports that he told family and friends he’d witnessed incoming rounds ricocheting off the ground in front of him as he and the woman ran for cover. When she fell, Cobos covered her with his body and attempted to shield her eyes.

That’s when Becker says he snapped the photo. He explained the scene in an interview with the Australian website News.com.au:

There were groups of people helping each other everywhere and a real sense of people running for cover. People were fleeing, they were panicking. The gunfire was sporadic, it would stop and then more shots, then a lull and then more shots. I could hear people yelling at them to shut off the lights, to be quiet. People were cowering, they were very fearful for their lives.

Moments after Becker took the photo, Cobos and the woman cleared the area. But the Daily Mail reports that the soldier later returned to assist with the injured, using his belt as a tourniquet and plugging bullet wounds with his fingers.

The attack occurred late Sunday evening when Stephen Paddock opened fire from the 32nd floor of the Mandalay Bay Resort & Casino, armed with an arsenal of weapons — some affixed with bump-fire stocks to modify semiautomatic firearms for rapid fire. The devastating attack left at least 58 dead, and nearly 500 wounded. Many were injured in the frantic scramble to get to safety.