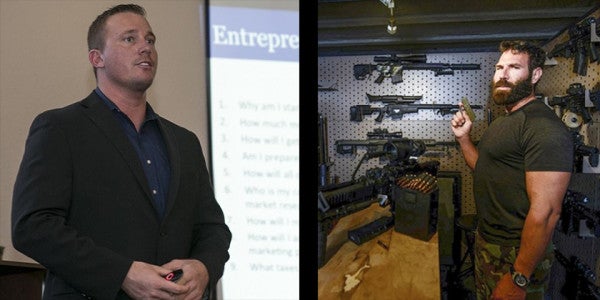 Bilzerian — a self-styled “King of Instagram” best known for his braggadocio, displays of fitness, and legal problems arising from an incident in which he threw a nude woman off a building and broke her foot — found himself in a terrifying and unscripted moment as gunfire erupted around him at the the Route 91 Harvest music festival on Las Vegas’ strip Sunday night.

The Snapchat video, uploaded to Bilzerian’s account in the wake of the attack, shows the social media celebrity running from the concert site, the Daily Mail reports.

Dan Bilzerian says he went to get a gun after seeing a girl get 'shot in the head' at Mandalay Bay Las Vegas shooting pic.twitter.com/EyiEWqlOdo

“Holy fuck, a girl just got shot in the fucking head. This is so fucking crazy,” Bilzerian said in the video, before adding that he was going home to “grab a gun.”

Meyer, who was awarded the Medal of Honor for risking life and limb to evacuate fallen coalition and Afghan soldiers during a Taliban ambush on Sept. 8, 2009, in Afghanistan, took to Instagram on Oct. 2 with a withering response to Bilzerian’s post:

While it's tough to say who is or isn't qualified to dictate how Bilzerian should have handled himself during a mass shooting, it's hard to feel much sympathy for a professed “operator” who decided to live-blog a tragedy for posterity’s sake.

After the attack, stories of tragic loss, panic, and fear juxtaposed with moments of spontaneous courage: Strangers gave their lives to treat the wounded; others commandeered trucks to serve as makeshift ambulances; and Las Vegas residents formed lines around the block to donate blood.

Amid the social-media mud-slinging that followed Bilzerian’s Snapchat video, one thing is certain: Countless unsung heroes in Las Vegas stepped forward in his wake.