Easily one of the most iconic uniform items in the military, the Marine Corps’ dress blue jacket is the recipient... 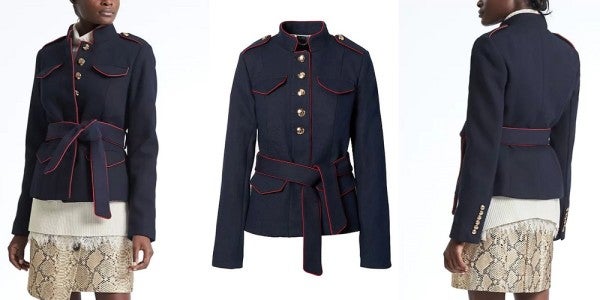 Easily one of the most iconic uniform items in the military, the Marine Corps’ dress blue jacket is the recipient of a rich, if oft-embellished, history. But now the two centuries-old standby is getting a $200 upgrade… and prime real estate on mannequins and coat racks at a major retailer.

Now, before folks start to grumble about stolen valor, it turns out that Banana Republic’s new top, while clearly modeled after the Marine Corps dress blues jacket, doesn’t actually violate any trademark laws.

While the Corps owns the rights to a number of insignias and logos, those licenses are limited to specific “uniform-based trademarks such as the iconic blood stripe, eagle and fouled anchor (appearing on the dress blues buttons), Eagle Globe and Anchor and even the desert and woodland camouflage patterns,” Jessica O'Haver, the director of Marine Corps Trademark Office told Task & Purpose in an email.

Well, the top is certainly similar to the Marine Corps' dress blue jacket, but the buttons… not so much.Screengrab via Banana Republic

In the case of Banana Republic’s hottest new piece of combat chic swag, “no USMC trademarks are present,” O’Haver explained. For example, the jacket’s buttons do not feature the trademarked eagle and anchor on, you know, actual dress blues.

“The product does not present itself as a genuine military issue item and no USMC branding is used in the promotion of the item, rather generic terms such as ‘military jacket’ to loosely describe the general theme,” O'Haver said.

While clearly a military-themed knockoff, and a pricey one at that, the jacket doesn’t violate the service’s trademarks, and as O’Haver notes, “no permission for use such as this is required.”

Besides, it’s hardly the first uniform item to make its way from military bases and onto the aisles of mainstream retailers. There’s Urban Outfitters’ stylish new addition to what we can only hope will be a recurring Central Issue Facility Fall catalog. Then there’s Nike’s strikingly familiar combat boot-sneaker hybrid. Foot powder and a change of socks are not included with those kicks, but they do come with a MOLLE-style handbag, for some reason.

But, if you're on the hunt for something with a vibe that's less “naval infantry” and more “maritime command,” just check out these other military-themed jackets, some of which look like they came off a Pirates Of The Caribbean set.