For years, John Bergmann dutifully described an incident at an Army training range during the early days of his World... 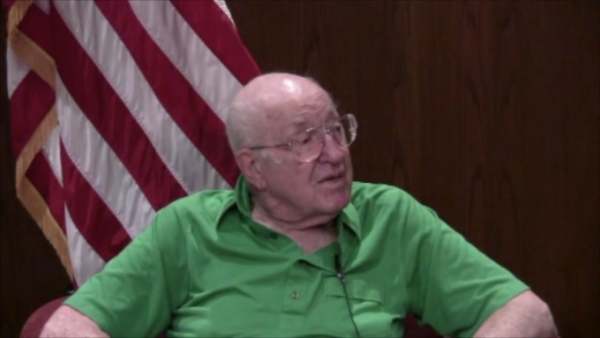 For years, John Bergmann dutifully described an incident at an Army training range during the early days of his World War II-era enlistment whenever someone asked about his prosthetic right eye.

“I had a Springfield rifle, it misfired, the bolt hit me,” he said.

No one ever questioned the story, but that wasn't what actually happened.

The Upper Arlington man was long sworn to secrecy and couldn't say that a grenade or land mine or some other explosive tripped by a Kachin Indian in northern Burma hit him in the face and put him in a military hospital just weeks after he joined the service in 1941.

Enigma in use, 1943Wikimedia Commons

It was secret stuff — he didn't even disclose the actual details to his wife and children until years later — that's been portrayed in movies like “Windtalkers” and “The Imitation Game,” the 2014 blockbuster that spotlighted Turing.

At 97, Bergmann is the last surviving member of his 25-man codebreaking unit and is among a ever-shrinking number of living World War II veterans. Of the 16 million Americans who served, about 558,000 are still alive, with an estimated 362 dying each day, according to the National WWII Museum, citing federal statistics.

Throughout the year but especially around Veterans Day, you'll find Bergmann out and about at area high schools, telling students about experiences that were long kept under wraps.

“That's the big part of my talk,” he said. “For many of us to be married and to lie all those years to your wife about what you did and where you were was one of the regrets every one of us had.”

Bergmann, a Chicago native, has always loved numbers. He began working in high school toward a career as certified public accountant, excelling at his studies, skipping two grades of secondary school and enrolling in the University of Pittsburgh at 17.

He was about a week away from his college graduation four years later when he was approached by a aide of Roosevelt with an offer of a special assignment in the U.S. Army.

Officials were scouring universities across the eastern part of the country for top math students for a different sort of service.

“A week later, I got my diploma and a one-way ticket to Fort Meade, Maryland,” Bergmann said.

There, he joined two dozen men who would become part of the Army's World War II codebreaking operations. Comparable units were already in place in Great Britain, which had been involved in the war for two years before Bergmann's enlistment.

Eventually, there were codebreaking posts around the world, operating 24 hours a day, with military men and women listening to radio signals, reading newspapers and other documents and translating Morse code in search of hidden messages.

The operations were strictly confidential. The service men and women involved couldn't share any details family or friends and were even given cover stories to prevent disclosure.

A Mark 2 Colossus computer. The ten Colossi were the world's first (semi-) programmable electronic computers, the first having been built in 1943Wikimedia Commons

“We were very incognito,” Bergmann said. He told friends and family, “I was an accountant doing payrolls in Washington. I'd be living in Fort Meade, but I'd be doing payrolls.”

Bergmann spent much of his five years in the Army based in Maryland, with occasional trips to London for meetings with his British codebreaking counterparts, but he did make one trip into enemy territory.

Shortly after completing his initial six weeks of training — all of it was focused on codebreaking, with little in the way of weapons or other combat instruction that most enlistees completed — he accompanied a codebreaking team to Pearl Harbor, where he was promptly picked up by a group of Army rangers for a mission near the border of Burma and China.

The Japanese military had a radio station in the vicinity, and Bergmann was ordered to search it for documents disclosing the code settings used by the enemy.

It was supposed to be a quick trip: The rangers would quietly handle the dozen or so Japanese soldiers at the station, and Bergmann would grab the paperwork.

But one of the Kachin Indians guiding the group set off an explosion that hit Bergmann in the face, sending him and the other soldiers scrambling to avoid a larger skirmish.

His commanding officer was in the room when he woke up after surgery in a Philadelphia hospital.

“The war's over, I lost my eye, I'm going to go home now,” Bergmann remembered saying, prompting his commander to reply, “No, you're going to be in a long time. You've got one good eye, we're going to use it.”

Bergmann served from 1941-45, retiring from the Army as as a major. He wasn't allowed to talk about his Army work until 1983, when the government lifted the secrecy requirements.

For decades, he had to lie or deflect questions, even from his wife and three daughters.

“It was hard for him not to tell my mom,” said Kim Elkovitch, one of his daughters who accompanied him on school visits this month.

Bergmann took an early retirement from his CPA job to care for his wife, who suffered from Parkinson's disease over the last 15-plus years of her life. She died in 1998, and Bergmann said he moped around the house for months afterward until Elkovitch kicked him out one afternoon.

That's the day he visited a local senior center and met a group of other veterans. Before long, he was leading that group and getting active in others.

A big part of his veterans-related efforts involves sharing the stories about his war experience and the people he met.

“I got along great with him, because I was a mathematician, and he was a brilliant mathematician, so we could talk about things,” he said. “I wasn't on his level though, believe me.”

Once, he and Turing were called to 10 Downing Street, the Prime Minister's office in London, for what turned out to be a meeting with a cigar-chomping Churchill and Eisenhower.

On a post-war family trip to Gettysburg, he stopped at the house of the latter for an unannounced (and brief) visit. Eisenhower remembered their earlier meeting.

In recent days, Bergmann and other veterans have visited area schools to talk about their military service.

They describe the battles, they talk about the friends who didn't make it off the battlefield, and they emphasize the importance of teamwork and sacrifice.

Bergmann also will tell the true story of how he lost his eye, occasionally wiggling his prosthetic and causing the students to cringe.

“It's just a shell that goes in there,” he said. “Every six months I get it cleaned and polished, and every five or six years, they replace it. It's a wonderful job, it's really nice.”