100 Years After His Death, A Civil War Veteran Gets The Burial He Deserves

The remains of Civil War veteran David H. Speaker languished in a pauper's grave for 100 years beneath a headstone... 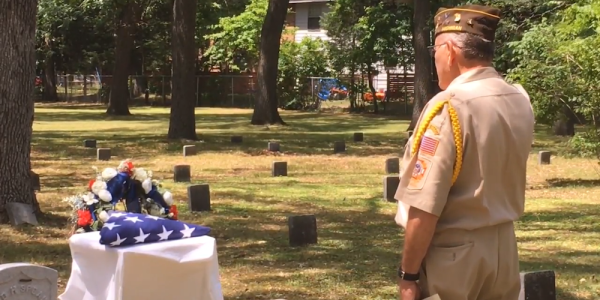 The remains of Civil War veteran David H. Speaker languished in a pauper's grave for 100 years beneath a headstone that made no mention of his military service record.

Speaker was born in Ohio and fought with the Company A 111th Regiment in the Ohio Infantry, and lived in Casnovia Township in eastern Muskegon County, Michigan. Following his death in 1918, Speaker's remains were buried without military honors.

On Monday, that historical wrong was made right as Speaker received the military burial he deserved. County officials and local veterans groups organized a small procession on June 25 to honor Speaker, complete with a new headstone and a three-volley salute.

The veteran from Ohio was born in 1835 and joined the military in 1863, said Bill Hansen, cemetery committee chairman with the Muskegon County Genealogical Society.

Speaker was discharged in 1865 at the end of Civil War. He spent his last days living in the Muskegon County Home, a “poorhouse” built as a place of last resort for the destitute in the late 1800s, according to the genealogical society.

Speaker was the only documented veteran interred at Shady Rest Cemetery in Muskegon Township, which at the time Speaker died was known as Potter's Field and was reserved for the poor, according to the genealogical society. No one has been buried there since 1970.

Officials learned about Speaker when the county embarked on a digital mapping project to chart each of the area's cemeteries, Hansen said. The goal was to pinpoint marked and unmarked graves so they could be presented digitally on the Muskegon County GIS map.

At least 17 Muskegon County cemeteries have been mapped and can be viewed online here.

In the midst of that work, Hansen said he decided to catalog the location of veterans buried throughout the county. That's when he turned up information about Speaker.

At the funeral Monday, members of the Muskegon County Council of Veterans of Foreign Wars honor guard took turns saluting Speaker's grave, which now features an ornate headstone and a decorative wreath distinguishing his service. After a short reflection and prayer, the honor guard drew their rifles and shot three volleys in cacophonous waves.

It was a much grander exit for Speaker, even if it was 100 years late.