At a shooting range near Daytona Beach Wednesday, a group of veterans and ex-cops stood in a line and took... 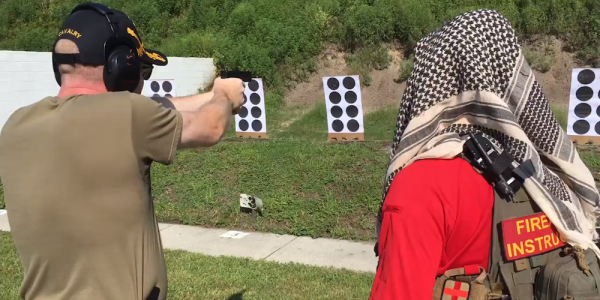 At a shooting range near Daytona Beach Wednesday, a group of veterans and ex-cops stood in a line and took aim, firing rounds into paper targets while instructors walked between them and offered tips. Some missed, but most made their mark.

They're the new school guardians — hired by the Volusia County, Florida, school district to protect elementary schools around the county this fall against possible active assailants. They'll be at the range for more than two weeks, training with firearms to be ready for the first day of school on Aug. 13.

“We will be ready to answer the call if it's necessary,” said Gregg Bastian, 55, a former fire department lieutenant and SWAT team medic training to be a guardian.

Bastian is one of more than 40 new hires who will go through the 132-hour training course in the coming weeks. So is Ernesto Rowe, 59, a veteran and a retired state probation officer who also worked for the Daytona Beach Police Department. Deltona City Commissioner Mitch Honaker, 64, and Angel Ortiz, 34, are veterans going through the program, along with former corrections officers Damon Sansom, 44, and Frank Hayward, 73. Now they'll all be at the district's elementary schools.

Their instruction began Monday, after a rigorous application process and, before that, months of debate at the district level about how to best meet a new state mandate on security at schools.

After a mass shooting in February at a Parkland high school left 17 dead, the state responded by tightening gun laws and requiring school districts to increase security measures at schools. State dollars didn't cover the cost of fulfilling those new requirements, so district officials began working in April to find a solution that wouldn't break the bank.

Part of that solution is putting guardians — district employees being trained by the Sheriff's Office — in elementary schools. Sworn law enforcement officers will staff middle and high schools in the county, but guardians are a little different. They'll carry weapons but won't have arrest powers.

Guardians are paid about $38,500 annually, and Volusia's price tag is nearly $2 million. The district is seeking help from the cities to help fund the program.

“I think it's a great idea to use the resources you already have in the community,” said Lou Wolf, a 60-year-old retired police officer. “Guys that already have experience, who know something about what they're doing.”

That's been the plan all along. The school district has been collaborating with the Sheriff's Office to dig through nearly 200 applications and find people who had law enforcement or military backgrounds. It was a lengthy process that delayed the start of training.

Each applicant had to go through a process that included fingerprinting, drug screening, a background check, a polygraph test, an evaluation of character references and a psychological examination. The new hires called the application process “thorough” and “rigorous.”

“You want to have the right kind of people in our schools,” said Sansom, a father to five kids in Volusia County schools. “If I could've retired, I would have volunteered to do it.”

The training process is just as rigorous. Even though almost all of the new hires have experience with weapons, they said the training is technical and they're learning new things each day — like how to draw your gun correctly, what to do in case of a misload and how to react in high-stress situations.

“When you're under pressure, it's a totally different world,” said Hayward, who has grandkids who go to school in the district. “If you have to think about it, it's too late.”

Parents and teachers in the community and across the state have questioned whether programs like this will prevent school shootings. Some people believe increased access to mental health services is the way to go — something the district is working on as well.

“We have to start somewhere,” Rowe said.

Honaker agreed: “Right now your children are in a safer environment until we come up with a better solution,” he said.

Overall, there will be more than 40 guardians. That includes some to staff select charter schools that opted into the program, as well as provide some alternatives. The first group is training now, and a second class will begin next week.

The guardians must complete the training with an 85 percent pass rate.

“We will be ready to answer the call if it's necessary,” Bastian said while he watched his classmates practice shooting. “I hope that we never have to.”