A veteran died on the Fourth of July 2018 after two calls to the suicide hotline went unheeded. 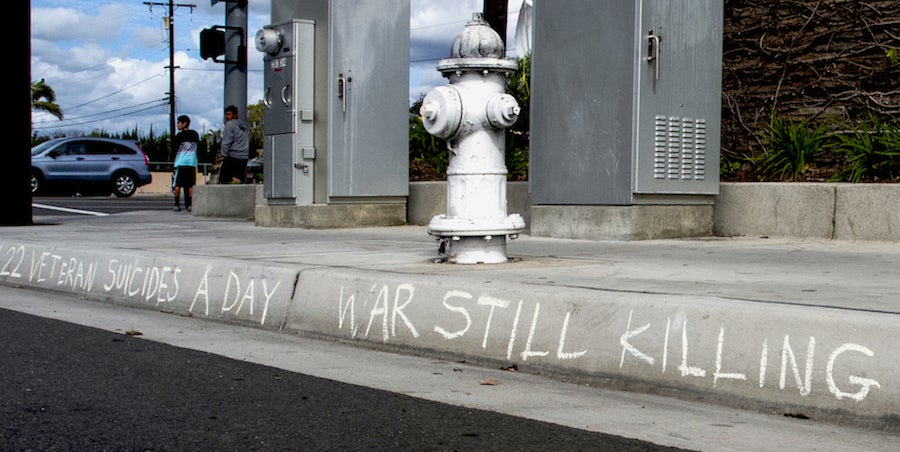 Editor’s note: This article by Richard Sisk originally appeared on Military.com, a leading source of news for the military and veteran community.

In the first call to the Department of Veterans Affairs‘ crisis line, the veteran spoke of having a gun to his or her head after drinking heavily.

It was 4:30 a.m. on July 4, 2018. The caller said the fireworks were bringing back survivor’s guilt from combat experiences and recounted taking drugs to try to sleep, as well as drinking shot after shot of whiskey.

“Responder 1” at the Veterans Crisis Line (VCL) accepted the caller’s statement that there were no bullets in the gun and initially classified the call as “low to moderate risk,” according to a report Tuesday by the VA’s Office of Inspector General.

Responder 1 did not judge that the call merited an emergency dispatch of police to check on the veteran.

About an hour later, there was a second call to the crisis line. The same person reported to Responder 2 “having a gun in [the caller’s] mouth” but denied having suicidal ideation or “the means to carry out this plan to shoot,” the IG report states.

Again, the police were not notified until approximately 11 hours later, when a rescue was initiated. The police found the caller dead.

The medical examiner did not rule the death a suicide but instead listed it as “best classified as undetermined” and likely caused by a combination of alcohol and an overdose of anti-depressant medication, as well as the drugs dextromethorphan, a cough suppressant, and diphenhydramine, an antihistamine, the report said.

“Although responders 1 and 2 documented that the caller was intoxicated, they did not adequately assess the caller’s use of alcohol or other drugs, failed to consider the caller’s potential overdose risk, and failed to initiate an emergency dispatch,” the medical examiner found.

In a letter Thursday to VA Secretary Robert Wilkie, Sen. Jon Tester, D-Mont., the ranking member of the Senate Veterans Affairs Committee, said, “This report is particularly disturbing because the veteran spoke to two different VCL responders and reported suicidal ideation, a past suicide attempt, access to lethal means, and intoxication from alcohol and drugs.

“Despite these red flags, neither VCL responder requested an emergency dispatch to check on the veteran and provide any necessary, immediate intervention.”

Millions of Calls for Help

A brief recording states, “You have reached the National Suicide Prevention Lifeline, also servicing the Veterans Crisis Line. If you are in emotional distress or suicidal crisis or are concerned about someone who might be, we’re here to help. Please remain on the line while we route your call to the nearest crisis center in our network. Attention: If you are a U.S. military veteran or current service member or are calling about one, please Press 1 now to speak with the Veterans Crisis Line.”

“Their efforts have resulted in the dispatch of emergency services nearly 119,000 times to veterans in need,” the department said.

The VA has repeatedly cited the quick responses at the Veterans Crisis Line and the skills of those who take the calls at three centers in New York, Georgia and Kansas as main factors in efforts to curb the suicide rate among veterans, which now stands at about 20 per day.

Less than a month ago, the IG issued a report praising the crisis line and its responders for their “remarkably successful” work during the COVID-19 pandemic.

“The OIG was impressed with [Veterans Crisis Line] leaders’ and employees’ efforts to ensure that the [hotline] met its mission to provide immediate access to crisis intervention services during the COVID-19 pandemic,” office said in the Oct. 25 report.

Despite a shift to teleworking, the responders had met all of their performance standards during the pandemic, including answering calls within three rings, according to the report.

However, the suicide rate among veterans has remained at about 20 per day for the last several years despite new strategies and government funding to address the problem.

In March 2019, President Donald Trump ordered a new approach that would combine the efforts of the VA; the Departments of Defense, Health and Human Services; and several other agencies to curb veteran suicides.

In June 2020, the VA announced the formation of the President’s Roadmap to Empower Veterans and End a National Tragedy of Suicide (PREVENTS) task force to raise awareness of the issue and connect at-risk veterans to mental health resources.

In an interview last week with Military.com, Rep. Phil Roe, R-Tenn., a doctor and ranking member of the House Veterans Affairs Committee, said he backed formation of the task force but had yet to see any impact on the suicide rate.

“I think the president did a great service to the country [in setting up the task force, but] the results haven’t changed at all. We haven’t affected the rate one notch,” said Roe, who will retire from Congress in January.

The call from the veteran in distress on July 4, 2018, was handled by the call center in Canandaigua, New York, the IG report said.

The caller was identified by the IG only as being “in their 30s” but had “a history of depression and alcohol use disorder.” In addition, the caller had previously “received intensive outpatient mental health treatment at a VA facility that included a spring 2018 suicide prevention safety plan,” the report said.

According to the 34-page report, “VCL staff did not initiate an emergency dispatch for the caller, who reported use of alcohol and over-the-counter medications that cause drowsiness,” the IG found. “VCL policies did not address management of intoxicated callers or assessment of risk for accidental overdose. The VCL did not have policies related to safety planning with intoxicated callers or risk assessment of accidental overdose of illicit or over-the-counter drugs.”

The report, titled “Deficiencies in the Veterans Crisis Line Response to a Veteran Caller Who Died,” said that the caller told Responder 1 of having downed “seven shots of whiskey earlier tonight.”

The call disconnected several times, but Responder 1 managed to resume contact with the caller, who reported dropping the call after taking two to four pills of the over-the-counter drug diphenhydramine.

The hotline responder documented: “This was not out of the ordinary for [the caller] and that it just puts [the Caller] to sleep,” the report said.

Responder 1 said the caller agreed not to touch the gun, to stop drinking and to call the hotline back “if in crisis or in need of further support.”

About an hour after the initial call, the veteran phoned back and told Responder 2 that they did not want the police coming to the house.

After about five minutes, the caller hung up.

Responder 2 tried to call back four times over the course of two hours but could not make contact. The responder consulted with a supervisor, and a call was finally made to the police.

“The caller died sometime between the last VCL contact and when the police department called the medical examiner for emergency dispatch at 4:27 p.m. on July 4, 2018,” about 12 hours after the initial call, the IG report said.

In its list of recommendations, the IG said that the Veterans Crisis Line director should evaluate the effectiveness of current training for responders and take action to ensure supervisory oversight of lethal means assessments for callers. The VA concurred with the recommendation.

The IG also recommended that the crisis line director establish a policy and training for responders’ assessments of callers’ substance use and overdose risk. The VA concurred with that recommendation as well.

In a statement Friday, VA officials said that “the Veterans Crisis Line grieves for the loss of this veteran and extends its deepest condolences to their loved ones.”

The VA added that in fiscal 2020, the VCL answered about 1,756 calls per day, had an additional 294 contacts through chat and text programs, and submitted about 371 referrals per day to local VA Suicide Prevention Coordinators who contact veterans to ensure continuity of care with local VA providers.

Also this fiscal year, VCL’s Quality Assurance Team monitored more than 11,000 calls from veterans, and assessed that 99.7% of those calls satisfactorily addressed risk of harm to self or others, the VA said.