The American Legion executive tapped to assume the organization’s top administrative position resigned abruptly on Wednesday amid allegations that she... 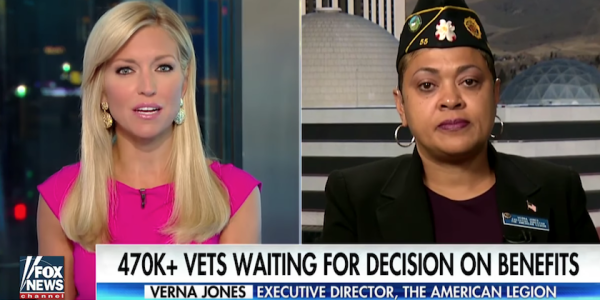 The American Legion executive tapped to assume the organization’s top administrative position resigned abruptly on Wednesday amid allegations that she exaggerated her professional and academic credentials, Task & Purpose has learned.

Verna L. Jones, 53, tendered her resignation as she was being groomed to take over for Daniel S. Wheeler, a Vietnam War veteran who has served as the Legion’s National Adjutant since 2008. Sources tell Task and Purpose that a cursory background check, required for her promotion, could not verify that Jones had a law degree or was ever licensed to practice law.

Jones’ colleagues seem to have been completely blindsided by her sudden departure — and also by the discovery that one of the Legion’s most cherished members, a woman highly regarded in policy circles for her strength of character and unyielding commitment to veterans advocacy, wasn’t entirely the person she has long advertised herself to be.

A Gulf War-era Army veteran, Jones started working for the Legion at the grassroots level in her native North Carolina and ascended quickly through the ranks, building a network of powerful allies that spanned Washington. She leveraged her gift for public speaking to help keep veterans issues at the forefront as it became clear that the Department of Veterans Affairs was ill-equipped for the aftermath of the wars in Iraq and Afghanistan.

“When I became the youngest, first post-9/11 veteran to lead one of the biggest organizations, [Jones] was right there for me to lean on,” AMVETS executive director Joe Chenelly told Task & Purpose.

“Standing shoulder to shoulder allowed for us to score major wins,” Chenelly added. “She made a real difference.”

Jones invigorated the Legion at a time when veterans service organizations, often associated with cantankerous old grunts, are struggling to draw in younger and more diverse members. In 2014, Jones was promoted to executive director, becoming the first woman — and the first African-American — to ever attain that position in the Legion’s almost 100-year history. The historic promotion was covered thoroughly by the media.

Reporters and radio hosts often described Jones as an attorney. One article highlighting her 2014 promotion mentioned her work for veterans while attending law school, adding that “with law degree and North Carolina bar certification in hand she did not practice law, but stayed working for the Legion.” A 2013 annual report of the Veterans Consortium pro bono law program listed Jones, a senior adviser to the program, as “Verna Jones, Esq.”, a title traditionally reserved for practicing attorneys.

“I think of Verna as an extremely qualified and knowledgeable professional veteran that The American Legion is fortunate to have,” then-National Commander Dale Barnett said in a statement following Jones’ promotion. “Her experience as an attorney and department service officer gives me full confidence every day that our Washington headquarters is in good hands.”

With more than 2 million members and roughly 14,000 posts, the Legion is arguably the most powerful veterans service organization in the country — “the biggest dog on the block,” is how Chenelly put it. As executive director, Jones ran point for the Legion in Washington. She was responsible for drafting and proposing legislation, lobbying Senators, and maintaining a direct line in to the White House. In March 2017, she was among a small group of advocates who met with President Donald Trump for a roundtable discussion on veterans issues and the future of the VA.

Jones was set to make history once again when she reported to American Legion headquarters in Indianapolis this month. Instead, much of her work for the organization will be clouded by the circumstances around her departure.

“In the VSO world, it’s very buddy-buddy,” a Legion employee told Task & Purpose on the condition of anonymity. “So when people get hired at the Legion, there’s no real vetting. But National Adjutant is the highest paid position and also very high profile. She would’ve been under a lot more scrutiny.”

The American Legion confirmed that Jones resigned but would not comment any further except to say that it “wishes her well in all future endeavors.” However, one of Jones’ now-former colleagues said the atmosphere at headquarters grew tense after Jones was informed that the investigators conducting the background check were unable to verify that she had graduated, or even attended, law school. (Jones declined to speak to Task & Purpose for this article.)

Another Legion employee, who worked with Jones closely, expressed concern over her wellbeing. “She is very bright and competent,” the employee said. “I’m really saddened by all this.”

On Friday morning, the Legion’s human resources director emailed the organization’s entire staff with an urgent request. “Please submit copies of your college transcripts and certifications to the HR Office at your earliest convenience,” it read. “If you have elected to take the voluntary separation agreement, please ignore this request.”

Editors note, 7/20/2018 12:30pm EDT: This article has been updated to note that Jones declined a request for comment.

Correction, 7/21/2018 12:50pm EDT: This article has been revised to clarify that the American Legion is “almost” 100 years old. A previous version inaccurately described the Legion as “more than” 100 years old.