Charity Puts Veterans On The Street To Ask For Money

The spirit of charity was in front of Publix on Friday. Before they went into the grocery store or after... 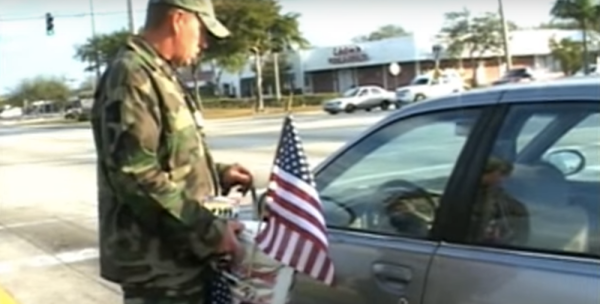 The spirit of charity was in front of Publix on Friday. Before they went into the grocery store or after they left, customer after customer pitched a dollar or two in a gallon bucket marked, “Please Help.” At 3:30 p.m., the bucket was 75 percent full.

One lady spoke to the young man in a tan khaki T-shirt and green khaki pants behind the table before pulling all the coins from her blouse pocket. Muscular, with a high-and-tight haircut, he looked ex-military. Except for the black tennis shoes.

Most read the big sign on the flag-decorated card table: “Veterans Support Organization.” What they should have read was the small type on his flag-decorated name tag: “NOT A VETERAN.”

“They just start giving their money out,” said Gene Brown, first vice commander the American Legion Post in Sebring. “I’m proud of Highlands County for doing that, but it’s not going to be used here.”

That’s despite what the sign said: “Money raised helps local veterans.” The man wouldn’t give his name, but he said higher-ups at the VSO would choose a local charity later.

How much will go to Highlands County? He couldn’t say, but page after page in the notebook on the table described the VSO or copied news reports or letters from the attorney general. One says 78 percent goes to the VSO itself.

“Are you a veteran?” Denise Williams demanded to know Friday.

“I never said I was,” the man said, and then he pointed out his name tag.

“I’ve been in combat. Twice,” said Williams, an Army sergeant who has served two Middle East tours. “Where is your organization from?” She is the official veterans service officer for Highlands County.

According to Florida Attorney General Pam Bondi, VSO is a Rhode Island non-profit with its principal place of business at 4245 SW High Meadows Ave., Palm City.

Two Publix managers came outside. Unaware of who the man was and who Williams was, they assured her that VSO had cleared the man to be there and set up a table on Friday and Saturday.

WPTV, the NBC channel 5 in West Palm Beach, reported on July 2, 2015 that Richard VanHouten admitted while some of the money VSO collects goes to veteran grants, most of the millions pay for his own veteran’s work program, which puts veterans on the streets to collect money for his charity.

“Why give the work to other professional for-profit companies?” he told the TV station. “Give it to the local veteran…”

Charitywatch.org didn’t buy that. “What are you doing to help veterans, putting them on the streets to beg?” asked Daniel Borochoff.

Others say VSO does good. A May 2012 post on courtantblogs.com said, “Richard Bittleman, my dad … worked for VSO as a substance abuse relapse prevention specialist for about 14 months. While at VSO, he and Ms. Giron build a 8,500 sq. ft. center in NY and were running programs there that changed the lives of homeless veterans. One veteran even was about to kill himself when he got a call from America Works sending him to VSO. He told his story at the grand opening and everyone was in tears. It was filmed.”

Williams pointed Friday to the sign on the card table at Publix. “We want to know if the money will go to help local veterans, that’s what we want to know.”

A Google search turned up dozens of stories about VSO.

On Dec. 17, 2012, the Associated Press reported VSO, “a charity already under scrutiny for how it raised hundreds of thousands of dollars in Tennessee, handed out only a fraction of the money in the form of gift cards, and threatened to fire workers if they didn’t meet fundraising quotas.”

On Feb. 28, 2014, FOX 4 tracked “the VSO across the country and found South Carolina kicked out the charity, Connecticut suspended the VSO after members of Congress complained to the Federal Trade Commission … Florida slapped the company with a fine for hiring felons and misleading the public, and North Carolina is now investigating.”

In Florida, Attorney General Pam Bondi has an online file: “Beginning at least November 2005 through the (Aug. 11, 2015), respondents have engaged in the business of soliciting donations from consumers in Florida and elsewhere in order to provide financial support and work programs for financially distressed and/or homeless veterans.”

The attorney general “has investigated allegations that, when promoting its organization and soliciting donations from the general public, respondents have misrepresented the amount and type of financial and non-monetary support that it provides to veterans. Respondents deny these allegations.”

But the man and the card table were gone.