In late January, Mansoor Shams, a 34-year-old former Marine corporal, was running through Seattle-Tacoma National Airport when a woman stopped... 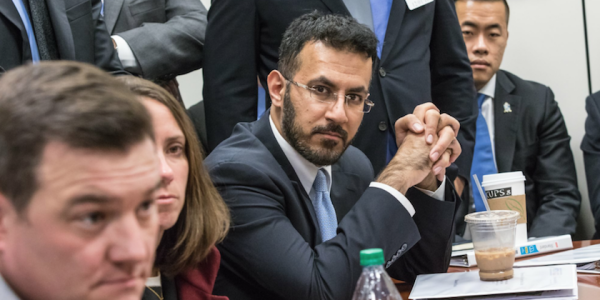 In late January, Mansoor Shams, a 34-year-old former Marine corporal, was running through Seattle-Tacoma National Airport when a woman stopped him. She wanted to talk about the whiteboard sign he was carrying. “I’m a Muslim and a U.S. Marine,” it read in thick red and blue marker. “Ask anything.” He had considered erasing the message. As a Muslim, he’d never felt especially comfortable in airports. But the woman had a big smile on her face. She just wanted to give Shams a high five.

“Here’s this stranger standing by my side and proudly showing her acceptance of people like me,” he told Task & Purpose in an interview. “She ended up making her own sign that read ‘Muslims welcome here’ and took it on her flight home to Missouri. Crazy, right?”

In truth, Shams might be a little crazy. A self-described introvert, he admits he’s never been the “protester type” or even very political. So why is he going from city to city trying to start a national dialogue with nothing more than a sign? His answer: “Because I know every person I get to talk to or interact with will be one more person informed and educated regarding my faith.” Despite widespread efforts to improve public perception of the Muslim-American community after the Sept. 11 terrorist attacks, Shams says many of his friends and family members are scared to travel alone and fear that government-endorsed religious oppression is on the horizon. Sitting still, he says, is no longer an option.

On Jan. 27, President Donald Trump signed an executive order temporarily barring the entry of immigrants from seven Muslim-majority countries. Although it’s since been frozen by several federal 9th Circuit judges, Trump’s staunch defense of the order will likely land it in the Supreme Court. For Shams, who came to the States as a refugee from Pakistan in 1988, the immigration ban is a personal affront. But he believes religious unity is possible. It’s all just a matter of perception. Which is why he’s traveling the country with his sign, acting as a sort of self-appointed ambassador between Muslim communities and mainstream America.

Shams was 6 years old when his family was forced to flee religious persecution in Pakistan. It was a tough move, but the Shams felt like they didn’t have much of a choice. As members of the small Ahmadiyya sect of Islam, they were subjected to restrictive laws that hindered their ability to freely practice their faith in Pakistan. The family eventually settled in Columbia, Maryland, a small town just outside of Baltimore. Though their new home was a world away from Pakistan, Shams’ family was happy to settle somewhere that accepted them.

The family quickly assimilated into Columbia’s tight-knit Muslim community, but Shams was curious about the America that existed beyond its borders. He didn’t have a direct route to college. So, after briefly considering the Navy, he enlisted in the Marine Corps and arrived at Parris Island for boot camp on Halloween night of 2000. He was scared shitless.

“Before we could blink, we pulled in and the drill sargeant just came straight at us screaming at the top of his lungs,” he laughed. “Now that I think about it, boot camp’s not something I’d want to go through again.”

But Shams quickly fell in love with the Corps. At first, his fellow Marines could have cared less that he was a Muslim. They were all patriots, brothers. But then the Sept. 11 terrorist attacks happened, and everything changed. At first, it was just a few jokes and some sideways glances, but eventually it escalated into what Shams described as open hostility. In one instance, Shams said, he was ordered to take a physical fitness test during Ramadan, a monthlong holiday during which Muslims cannot eat or drink anything from sunrise to sunset. The test probably could have been delayed, but he wasn’t given a choice — he completed it on an empty stomach. The incident stuck with him.

Shams left the Marines with an honorable discharge in 2004. He moved back to Baltimore, where he began working for the federal government as an assistant to two SEC chairmen while earning his master’s degree in government with an emphasis on national security studies. Shortly after, he received his MA/MBA from Johns Hopkins University. During that time, he also got married and fathered four children. But as he transitioned back to civilian life, Shams saw that the animosity he’d felt from some of his fellow Marines wasn’t just a quirk of military culture — it was a worldview that was becoming progressively more prevalent in America. He felt compelled to do something about it, but he didn’t know what to do.

Then one day he received the push he needed. Dr. Faheem Younus was a prominent member in Shams’ community. When the doctor, whom Shams considered a close friend and role model, pulled him aside and asked him to use his platform as a Muslim and a Marine to promote peace, Shams initially balked. The idea sounded nuts to him. After much deliberating, though, he agreed to start muslimmarine.org in June 2015. The goal: to start a dialogue to show the values that Islam, America, and patriotism all share.

“The Prophet Muhammad said, ‘Love of one’s country of residence is a part of faith,’” Shams said. “It was my Muslim faith that lead me to join the Marines in the first place — it allowed me to be my complete and entire self, serving my country and god all at once — and it’s what is fueling me now.”

Since starting muslimmarine.org, Shams has directed outreach efforts across the country. These efforts have including everything from handing out ice cream to children in Baltimore after their city was ravaged by riots, to organizing “Veterans and Muslims United Against Hatred,” an event he set up alongside the group Veterans for American Ideals. By far his most notable campaign has been his latest one, which brought him to different cities with his now-famous sign. It’s an ambitious undertaking, but Shams believes it’s making a real impact.

“We’re working to combat bigotry and anti-Muslim sentiments by showing people that people like me exist — proud Americans, proud Muslims, and proud Marines, all at the same time,” he said. “You’d be surprised how much you can change someone’s worldview with a single conversation.”

Shams and his sign have traveled to six states so far: Texas, Colorado, Oregon, Washington, Maryland, and New York. His presence has drawn looks of perplexity and disbelief from many people, but most of the conversations he’s had have been productive, if not pleasant.

“Most people are shocked when they see me, but that’s a good thing. Challenging someone’s worldview is the most important step,” he said. “Once they’ve seen that Muslims can be patriots and Marines, they’ll be more likely to question the broad, often negative perceptions of our community.”

Shams admits it’s difficult to gauge his success here. After all, this isn’t exactly an orthodox strategy to create political change. He’s been pleasantly surprised by the outpouring of support, though, and confident his reach will continue to grow. And while his chances of speaking with the president are astronomically low, he still knows what he’d say to Trump if given the opportunity during his upcoming appearance in Washington, D.C.

Mansoor Shams speaking at “Veterans and Muslims United Against Hatred,” an event he organized in Baltimore

“Islam teaches us to be loyal to our country and obey people in authority — even if we disagree with them. We’re not a ‘Not my president’ community,” he explained. “If the decisions he’s trying to make our country safer, I can’t be angry with him. But we need to eliminate the broad-brush mentality that has painted every person from particular countries as terrorists. That’s not what America stands for, and it’s not what our armed forces have fought for.”

Despite the attention his movement has gotten — including appearances on BBC Newshour, PBS, The New York Times, and many other media outlets — Shams doesn’t believe things are going to get better for Muslims and minorities in America anytime soon. In fact, he likens his current situation to his family’s in Pakistan decades ago, and openly wonders if his turn to face religious persecution is approaching. But rather than letting this discourage him, it keeps him going when he’s feeling exhausted or beaten down.

“At the end of the day, regardless of what faith we follow, we’re human beings first and foremost,” he said. “We have a responsibility to create positive change in our country and in our world, even if it kills us a little bit.”