This Marine Infantry Vet Lost His House To A Wildfire. Now He Keeps Others’ Homes Safe

After 46-year-old Marine Corps veteran Everett Evans lost his home to the Erskine wildfire that raged across 50,000 acres in... 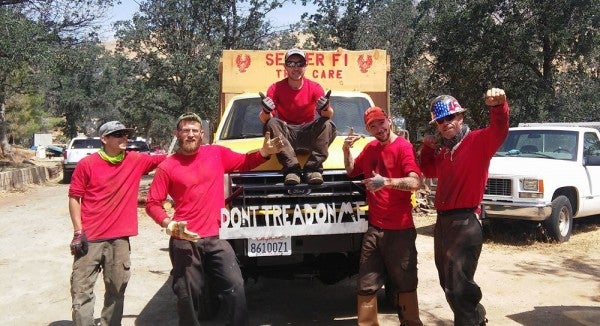 After 46-year-old Marine Corps veteran Everett Evans lost his home to the Erskine wildfire that raged across 50,000 acres in central California last summer, he was devastated. But now, he’s doing everything he can to make sure that doesn’t happen to his small Kern River Valley community again.

“I saw the despair in people's eyes, the frustration and the pain and suffering,” said Evans, who worked as a wildfire fighter for four years after the Marines.

After the fire that razed his home, he left California and headed North to Oregon, ready to turn “throw in the towel” and start fresh. “I was really upset and angry about what happened,” he told Task & Purpose.

But he only stayed a few days. After a little soul-searching at church, he said, he felt compelled to come back to California: “Basically, I just had a prompting from the man upstairs.”

Five months ago, and with just $500 dollars to his name, Evans, who served as an infantryman with 1st Battalion, 5th Marines from 1992 to 1996, decided to start the Semper Fi Tree Care And Fuels Crew. In this arid corner of the West, fire-prevention requires a serious commitment.

“That’s why we named the business is Semper Fi: We show up. We always show up and we don’t leave anybody behind,” said Evans, who left the Marines as a terminal lance — a point he’s proud to make. “I’m not going to leave anybody in the valley behind. After that Erskine Creek wildfire, I don’t wish that on anybody.”

Evans bought a chainsaw, some tools, hopped in his jeep, and got to work trimming trees and cutting back brush in the valley. Word of mouth spread, and the business grew in kind. Now Evans leads a four-man crew — his own personal fireteam of young men in their mid-20s who grew up in the area, went to school together, are “hungry for work,” and have a vested interest in the community, he says.

He also puts them through the paces. “He’s rough and tough and there’s no try. It’s either do or do not,” says Jeffrey Baker, who’s been with Semper Fi since shortly after Evans founded it. “It’s a good feeling because sometimes we get ourselves into a bit of a shitstorm, so we’ve learned to stay calm, stay collected, and it makes us do a good job.”

“I train them like I trained my Marines, so it’s rough,” Evans jokes, but that’s probably a good thing.

The work is demanding, lasting 8 or 10 hours a day in the hot sun, especially during summer, when the central California temperature hovers around 100 degrees. The Semper Fi crew focuses on tree-trimming and removal, weed abatement, and fuel reduction — clearing large swaths of dead or dying vegetation so that when another blaze begins (“not if,” Evans stresses), there won’t be fuel for the ensuing fire.

Many of the homes in Kern County rest on large properties, so the small crew covers a lot of ground in a day — at times walking for miles clearing dried up vegetation, removing rotting trees, and generally stopping a disaster before it can start. Their work is prevention, but it’s critical, Baker said.

“For a lot of the fuel reduction or hazardous removals, we’ll go in and trim the bushes, trim the trees, and make it so that if a fire does come through that area, the fire doesn’t maintain a lot of heat, because there’s not a lot of fuel,” Baker said. “It also allows firemen a better situation to go into to go fight. It’s a lot easier to run hose through a manicured property than through fifteen feet of weeds and overgrown trees.”

For Evans, the work all comes down to the keeping faith with the community, and staying true to that old Marine Corps maxim: always faithful.

“This is my hometown, I love the people, and these people are here for each other,” Evans said. “That’s why we do it.”