A Navy commander serving as the spokesman for the service’s top admiral was recently reassigned amid accusations of unwanted sexual... 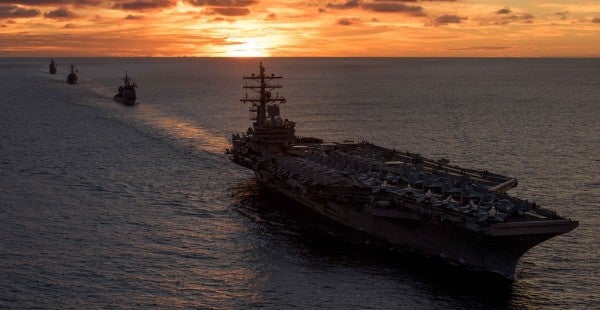 A Navy commander serving as the spokesman for the service’s top admiral was recently reassigned amid accusations of unwanted sexual advances at a Christmas party in 2016, USA Today reports.

After the allegations surfaced in December 2016, the officer, Cmdr. Chris Servello, was permitted to remain at his post as the spokesman for Adm. John Richardson, the Chief of Naval Operations, until mid-August, even after written reports were submitted detailing the alleged misconduct.

Like a scene from some kind of military parody of Bad Santa, Servello allegedly made unwanted advances toward women at a holiday party at the Pentagon. The party was a boozy affair, during which Servello allegedly slapped one woman’s buttocks and made advances on two junior officers, one of whom was intoxicated — and he did it all while dressed as Santa Claus.

Servello told investigators he’d had four drinks at the party, including a shot of Fireball cinnamon whiskey (to stay in the holiday spirit, no doubt), and that he’d donned his Kris Kringle guise because he “thought it would be fun,” according to official documents provided to USA Today.

The civilian employee at the office who Servello reportedly groped, said she “did not feel she was a sexual assault victim, but felt humiliated and disrespected” by the officer’s actions, according to USA Today. Another woman, a subordinate, told investigators that Servello, who is married, gave her “uncomfortable” and unwelcome hugs, before she pushed him away. She also said Servello made a pass at her two years prior, and told her at the party that “he didn’t know how to act with her, since the last time he was alone with her ‘he was practically humping (her) leg,’” USA Today reports. Servello was also accused of displaying predatory behavior by making a pass at another junior female officer who was drunk, and called her a total of six times that night.

Following the party, Capt. Peter Hudson wrote in a Dec. 21, 2016 report that: “I recommend that CDR Servello be immediately reassigned to a billet with no supervisory responsibilities and with dedicated oversight,” reports USA Today. Hudson’s letter triggered an investigation by the Naval Criminal Investigative Service (NCIS), which wrapped up in the spring, according to The Hill. But it wasn’t until mid-August, weeks after USA Today sought documentation of the incident, that Servello was finally reassigned.

“While I do not believe this incident rises to sexual harassment, CDR Servello clearly appears to have exhibited predatory behavior in targeting a young LT who had too much to drink,” Hudson wrote, according to documents obtained by USA Today.

In a statement, Servello told USA Today that the investigation did not recommend any criminal charges be levelled against him, but he did note that his career would likely suffer.

“Ultimately, the allegations were unproven and charges were not filed,” Servello said. “I should have never put myself into a situation where my judgment or my military bearing could be called into question. I deeply regret this and have been held to account for my decision making. Indeed, the overall effect of the administrative counseling makes it highly unlikely that my career will recover.”

Servello’s is just the latest incident involving a high-profile officer accused of sexual misconduct. The commander of U.S. Army Africa, Maj. Gen. Joseph Harrington, who is married, is being investigated over suggestive text messages sent to a subordinate's wife. Then there was the “swinging general,” Army Maj. Gen. David Haight who was demoted three ranks, retiring as a lieutenant colonel, after his 11-year affair with a government contractor came to light. And the list goes on.

There’s also the former aide to then-Secretary of Defense Ash Carter, Army Lt. Gen. Ronald L. Lewis, who billed the government for visits to strip clubs. And the Navy’s Rear Adm. Bruce Loveless who was caught up in the “Fat Leonard” bribery scandal that’s trailed the service for years. And the Army’s Maj. Gen. Wayne Grigsby, who retired as a one-star general due to an inappropriate relationship with a female officer on his staff, five ranks below him.

The latest incident is especially embarrassing for the service, given Servello’s position as an officer tasked with representing the branch to the media and broader public. But the allegations against the spokesman are not without a hint of irony: In 2012, Servello spoke to Wired for a story about a submarine commander faking his own death to avoid a lover, asserting that “the vast majority of our commanding officers serve with distinction.”