The Army general who racked up nearly $3,000 in charges on his government-issued credit card at strip clubs — and... 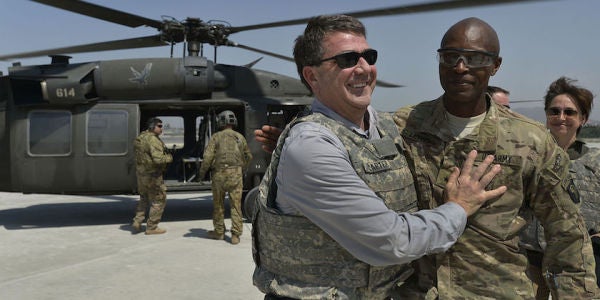 The Army general who racked up nearly $3,000 in charges on his government-issued credit card at strip clubs — and also harassed female subordinates while serving as the defense secretary’s top military assistant — will get to keep his security clearance when he retires, USA Today reported Tuesday afternoon. Color me surprised.

Brig. Gen. Ronald F. Lewis was fired in November 2015 as then-Defense Secretary Ash Carter’s senior military advisor after partying it up with the “locals” at places like Candy Bar Club on “Hooker Hill” in Seoul, South Korea, and the Cica Cica Boom bar in Rome, Italy, before trying to pin the bill on the Department of Defense. At the time, Lewis claimed he didn’t know his conduct was out of line, but a year-long DoD inspector general investigation determined he was actually just full of shit.

The IG report ultimately found that Lewis lied about his actions, misused a government travel charge card, and demonstrated “conduct unbecoming an officer and a gentleman,” the phrase the military likes to use for dudes who party with hookers. The report was released in October 2016, then submitted to the Army to determine Lewis’s punishment.

In February 2017, the Army demoted Lewis by one star to brigadier general, but don’t worry, he’ll still receive an annual pension of about $80,000, after taxes, in his first year out. He did receive a scathing letter of reprimand in his personnel file, which will be relevant until he retires, when no one cares anymore.

But just to make make sure that Lewis lands on his feet when this whole mess is over, the Army refrained from revoking his security clearance, which means he’ll have little issue transitioning into a cushy civilian life as a well-paid defense contractor with the backing of the Army. In fact, that’s exactly why the clearance wasn’t revoked, a defense official told USA Today.

While the strip-club mishaps might make Lewis sound like a just another fun guy with a wild streak, the DoD inspector general also investigated multiple reports of sexual harassment from female subordinates. In August 2015, while traveling with the defense secretary in California, Lewis asked a female enlisted soldier to report to his room to brief him on the day’s events. When she arrived, he was wearing only gym shorts and neglected to don additional clothing while she briefed him. Four months later, in November 2015, Lewis reportedly tried to kiss a female subordinate during another trip to Hawaii. The soldier said she’d had to physically ward off his advances.

Lewis’ punishment from the Army comes in the middle of the Marines United nude-photo-sharing scandal, in which lawmakers and advocates have argued that the military enables a culture that deems the mistreatment, harassment, and assault servicewomen as acceptable.

“If these reports are accurate, I would certainly want hear from the Army about their rationale for this recommendation,” Democratic Rep. Jackie Speier of California,one of the lawmakers leading the charge on sexual assault and harassment in the military since 2013, said in a statement. “The official reprimand by the Army Vice Chief states that Gen. Lewis’ conduct impugns his personal and professional judgment, bringing significant discredit to the Department. Secretary Carter agreed and fired him. If that isn’t disqualifying for a position of trust that requires a security clearance, I don’t know what is.”

Me neither, Jackie. Me neither.