The military awards process has undergone some pretty significant changes, designed to recognize a service member’s contributions on and off... 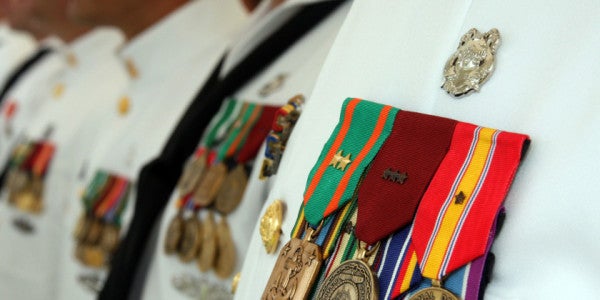 The military awards process has undergone some pretty significant changes, designed to recognize a service member’s contributions on and off the battlefield.

The guidance introduces two new devices, which will apply to 12 types of awards across all military branches. The devices are designated as “C” — for meritorious performance under combat conditions — and “R” for remote, which acknowledges those not directly exposed to hostile enemy action or significant risk, according to Military Times. Those who receive a service-specific commendation medal for actions in a hostile area would receive a “C” device. The “R” device would allow for cyber warfare specialists and drone operators, among others, to receive recognition for their efforts in support of combat operations.

Related: There’s No Such Thing As The ‘Congressional’ Medal of Honor »

According to the DoD award guidance, the “C” device requires that an individual be exposed to significant risk or hostile action, under the following circumstances:

The “R” device would apply to those not in direct combat, or facing significant risk, but the service member must still be supporting the combat operations listed above.

In addition to the two new devices, the award changes include new requirements for “V” or valor devices. Service-specific achievement medals are no longer eligible for a “V”, though they now rate a “C” or “R” device. This also applies to the Legion of Merit, which was previously eligible for a “V” device in the Navy.

According to Military Times, the policy also tightens criteria for Bronze Star medals:

“The policy changes also seek to tighten the criteria for awarding the Bronze Star specifically, a combat award that can be presented without a “V,” and often was throughout the wars in Afghanistan and Iraq, for “meritorious” performance. Now, a service member could receive a Meritorious Service Medal instead if his or her commander determines that, while the job performance was admirable, the assignment came with few inherent risks.”

The thinking appears to be that since a Bronze Star can’t be awarded with a “C” or an “R” device, just a “V,” a commander will lean toward presenting a service member with an alternate award with a “C” device if their performance in a combat zone was exemplary, but not did not include battlefield heroics.

But for vets who recall standing in numerous formations to watch company first sergeants and commanders receive Bronze Stars for manning a JOC or COC during a battle 500 clicks away, the new policy smacks of wishful thinking. Why not just do away with “V”-less Bronze Stars? Maybe that’s a conversation we can have when the Long War turns 20.