Officer Under Fire: ‘I’m Not A Toxic Leader, I’m An Ass Who Expects You To Do Your Job’

Where, precisely, is the fine line between an exacting, razor-sharp leader of soldiers and a complete tool of an officer?... 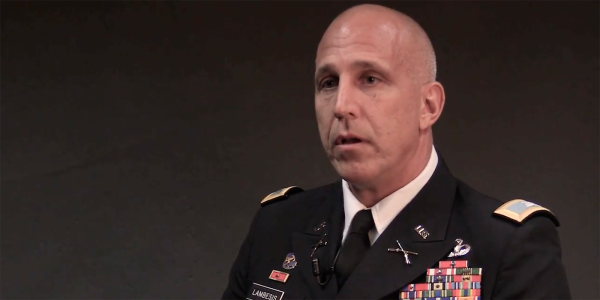 Where, precisely, is the fine line between an exacting, razor-sharp leader of soldiers and a complete tool of an officer? The answer to that question may determine the fate of Col. Christopher Lambesis, “a mountain of human muscle” nicknamed “Big Nasty,” who’s accused by his Arizona National Guard superiors of being, well, too much of a hardass.

Lambesis is, according to one master sergeant’s description, “a 6-foot, 4-inch Airborne Ranger infantry colonel with meat hooks for hands, gravel in his throat and a presence of experience. Yes, he is intimidating. I imagine he would still look intimidating sitting in a Port-a-John.”

Lambesis is also on his way out as the Arizona Guard’s top operations officer, his 24-year Army career on life-support, over claims that he “was a toxic leader and a bully who created a hostile work environment,” according to a new in-depth report on his case by the Arizona Republic, which previously exposed corruption and chaos in the state’s Guard ranks in 2013.

Remember what Gunny Hartman told his trainees at the beginning of Full Metal Jacket? “Because I am hard, you will not like me.” Col. Lambesis says he’s like that mythical drill instructor. “I’m not a toxic leader,” he told the Republic’s Dennis Wagner. “I’m an ass who expects you to do your job, and I fully admit to that because I want people to be combat ready.”

In February 2016, Lambesis got a promotion to O6 and a billet running operations and training for all the state’s 8,300 part- and full-time guardsmen. By that October, he was being escorted out of the Phoenix headquarters, under guard, for his bullyish style.

Here are the toxic practices that put Lambesis under scrutiny from his Guard overseers:

Anyone who’s drilled at a reserve center or National Guard unit — where the most common day-to-day mission is looking deployment-ready on paper — is unlikely to be surprised by Lambesis’ allegations. Nor would they be surprised by the consensus opinion on Lambesis himself, offered by both his critics and supporters: The man is a loud, scary tool.

“He has a very rigid picture of what an effective leader looks like, and that picture is Chris Lambesis,” one junior officer told investigators.

“I dread going into any meeting with Colonel Lambesis,” another O4 said, according to the Republic. “He has a tendency to hijack the meeting from whomever is speaking and tries to take control by berating the briefer.”

Even a master sergeant who was supportive of Lambesis’ leadership had to admit he was an irascible hardass. “I don't think Colonel Lambesis got a fair shake, but he didn't do himself any favors, either,” he told an inquiry, which was called in mid-2016 after the colonel was formally accused of hostility by three junior officers.

Those charges, and other accusations of hostility — including from his boss, Lt. Gen. McGuire — led an administrative tribunal to discharge Lambesis honorably from full-time duty. Now he’s just another “weekend warrior,” being told to drill part-time, or retire his commission.

But Lambesis tells the Republic he’s not giving up. “We're taught to hunker down and take on the charge,” he said. “I've been under fire in the fox hole, basically shooting at anything that jingles my wire for the past year. … I believe the institution of the Army is at risk.”

The Republic story doesn’t go into detail on Lambesis’ combat experience, but Task & Purpose’s staff of combat veterans quickly gleaned a few details from a recent photo of the colonel’s dress uniform, provided by the Republic. Based on that image, he’s an Airborne, Ranger-qualified soldier with two Iraq Campaign Medals, and he has two Bronze Stars — though it appears he lacks a “V” device or a Combat Infantryman Badge.

Regardless of his downrange experience, Lambesis’ case illuminates all the joys and pains of soldiering. Sometimes it takes an asshole to get an outfit ready for war. Other times, though, an asshole is just an asshole. Where you come down on the case of the colonel they call “Big Nasty” depends on which type of military asshole you are.