That moment a Guardsman realized: ‘If my unit sees that, I’m dead’ 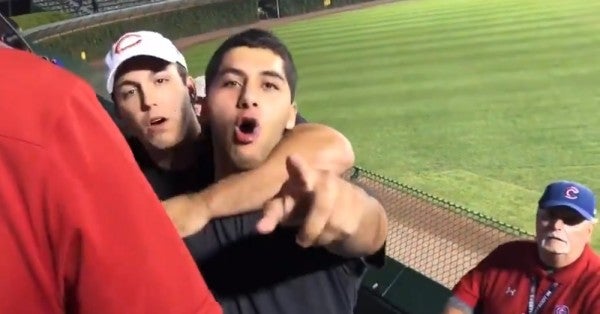 In the age of viral infamy, there’s now something more terrifying for a junior service member than showing up on the local police blotter: Having a moment of jackassery — or in this case, bigotry — blasted over the internet.

The incident, which took place after a Chicago Cubs game on Sept. 24, began making the rounds online after Twitter user Danny Rockett uploaded a pair of clips, one showing attendees brawling in the bleachers, and another showing a man yelling the slurs after the two groups were separated.

Have at it then. pic.twitter.com/M6FdtanK4Z

In the video, you can see the exact moment when the man hurling racial epithets catches sight of the camera. As his friend tries to pull him away, he realizes he’s being recorded, points, and says: “don’t record me!” A few moments later, a voice is heard saying “if my unit sees that, I’m dead,” although it’s unclear whether it’s the same man, or a different person.

The surprise and fear is apparent; all that’s missing is a clear narration of his inner monologue. Fortunately, someone went ahead and added that so we didn’t have to:

it’s only right for me to do this ? pic.twitter.com/gmMz2sT5ui

Though the Indiana National Guard did not publicly identify the man yelling in the video, the service did confirm that a National Guardsman was involved in the incident, and that an investigation is underway.

“While we have an investigation underway, it would be inappropriate for me to comment on this specific case,” Indiana Adjutant General, Maj. Gen. Courtney P. Carr, said in the statement. “However, our focus on values, especially the value of respect, and our effort to celebrate diversity is clear and steadfast. We expect all of our soldiers and airmen to embody the value of respect. We do not, and will not, tolerate behavior contrary to our values.”

The parties involved in the altercation were escorted from the stadium, according to a statement from the Cubs provided to News 8. No charges were filed, or arrests made, though the ballpark has barred the participants from attending games there for the rest of the year. However, the man in the video using “inappropriate language” will likely be banned from Wrigley Field indefinitely.

UPDATE: 9.27.2018; 3:02 pm: This article has been updated with additional information from the Indiana National Guard.