'Eleven hundred men went into the water. 316 men come out, the sharks took the rest...' 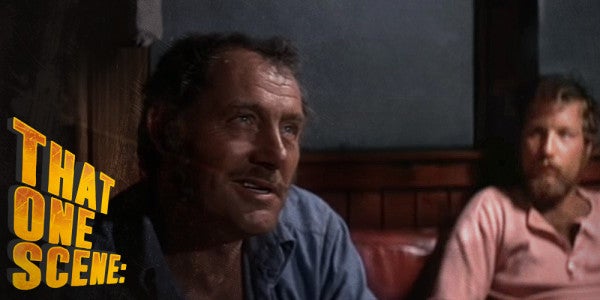 (Editor’s note: An earlier version of this article was originally published on Aug. 3, 2018.)

Steven Spielberg briefly ruined the ocean for me, thanks to his 1975 classic Jaws, in which a giant great white shark terrorizes the sleepy New England beach town of Amity Island. It’s hard not to develop a phobia of sharks after watching a two-hour bloodbath where a rogue fish devours five people, and one dog.

Watching it again as an adult, I now realize the true horror of the film doesn’t play out in blood-soaked waters, but inside the cabin of a fishing boat, over drinks:

The scene begins innocently enough. Inside the Orca, Quint, the boat’s captain, played by an acerbic Robert Shaw, regales marine biologist Matt Hooper (Richard Dreyfuss) and the town’s police chief, Martin Brody (Roy Scheider), with sea stories of how he earned his scars.

To anyone who’s drunkenly shot the shit with old friends, it’s a relatable moment, from the highs, to the inevitable alcohol-fueled lows: The audience is reeled in as the characters drink, swap tales, boast, and quip. But when Hooper asks Quint about a scar on his forearm, the salty fisherman, hired by Chief Brody to hunt and kill the shark, at first appears to evade the question — hinting at the troubling memories about to spill forth.

What makes the scene so haunting — aside from Shaw’s perfect delivery, down to the character’s empty eyes and sour smile — is that the story is based on real-life events.

Throughout the nearly four-minute speech — which Shaw helped edit down from a ten-page draft to just five — the actor gets only a few details wrong: the date of the sinking, and the size of the crew.

The Navy cruiser USS Indianapolis was returning from a mission in the Philippine Sea to deliver parts for the atomic bomb that would later be dropped on Hiroshima, Japan. Of the nearly 1,200 crewmen aboard the USS Indianapolis, an estimated 200 went down with the ship when it was struck by a pair of torpedoes from a Japanese submarine just after midnight.

The Indianapolis sunk so suddenly that survivors recalled leaping into the ocean, or in some cases, simply stepping over the side to escape, with one telling the San Diego Union-Tribune: “I didn’t jump off the ship … The ship left me.”

It was a harrowing five days before the survivors were rescued. Adrift at sea, the crew faced drowning, thirst, exposure, and sharks. Of the 1,196 crew, only 316 were rescued.

Back inside the cabin of the Orca, Quint describes the experience in graphic detail and with haunting imagery:

And the thing about a shark is he’s got lifeless eyes. Black eyes. Like a doll’s eyes. When he comes at ya, he doesn’t even seem to be livin’… ’til he bites ya, and those black eyes roll over white and then… ah then you hear that terrible high-pitched screamin’. The ocean turns red, and despite all your poundin’ and your hollerin’ those sharks come in and… they rip you to pieces.

The scene served as a way to explain how the cantankerous, brooding sailor came to be that way. And it’s the remorse and pain Quint expresses that fuels the monologue. In two separate instances, Quint recounts the number of men lost, and the mission, once at the beginning:

“We’d just delivered the bomb. The Hiroshima bomb. Eleven hundred men went into the water. Vessel went down in 12 minutes.”

And again at the end: “Eleven hundred men went into the water. 316 men come out, the sharks took the rest… Anyway, we delivered the bomb.”

The effect is that we know the value of the mission isn’t lost on Quint, but he’s keenly aware that it’s what ultimately spelled the crew’s doom.

“What we didn’t know, was that our bomb mission was so secret, no distress signal had been sent,” Quint says. “They didn’t even list us overdue for a week.”

The circumstances of the sinking and fate of the crewmen remained a mystery to the greater public for long after — and many were only made aware of the disaster after Jaws hit theaters.

Much like Hooper and Brody in the scene, the speech leaves you unnerved and wishing for dry land.