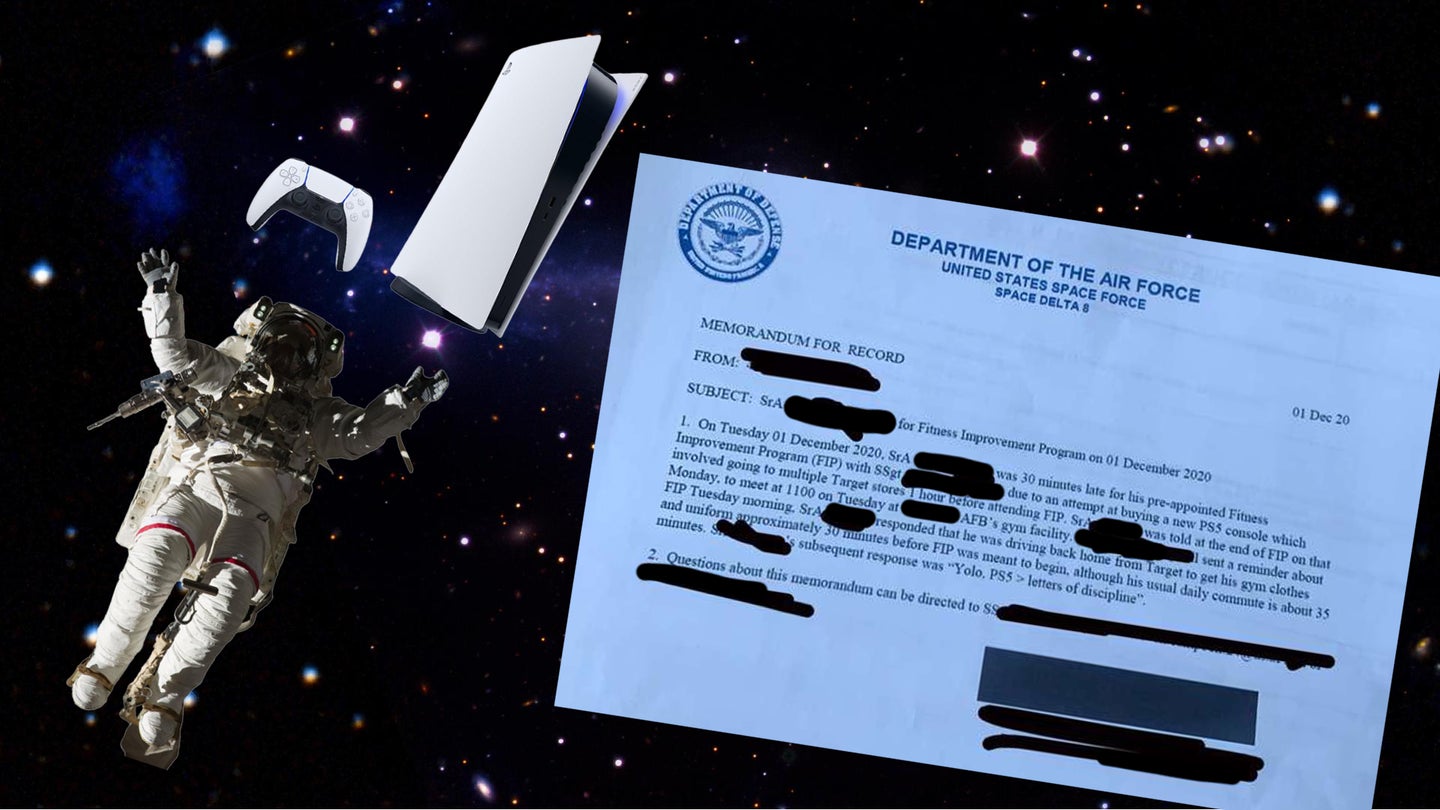 A recent Space Force letter of reprimand is truly a sight to behold. According to the letter and an accompanying memorandum for record, a Space Force member was 30 minutes late for a fitness lesson because he was scouting out nearby Target stores for the new PlayStation 5 console.

It gets better: when the Space Force member was reminded by his superior to get his ass to the fitness lesson, he responded “Yolo, PS5 > letters of discipline.”

Yolo, as the kids say, means “you only live once,” and it’s that kind of reckless attitude that gets one’s name written up in a letter of reprimand.

“You were late to work and insinuated to your supervisor that buying a PlayStation was more important to you than the disciplinary consequences of your actions,” read the letter, which was shared on the popular Air Force amn/nco/snco Facebook page on Tuesday. “Your actions are an extreme deviation from the professionalism expected of you as a member of the armed forces.”

As a result, the Space Force member was knocked down a rank from Senior Airman to Airman 1st Class on Tuesday, the letter read. It might have been a worthwhile trade-off to get a highly sought-after PlayStation 5, but the letter does not indicate whether his search was successful.

A spokesperson for Space Delta 8, the Space Force unit located at Schriever Air Force Base which issued the letter, could not confirm the authenticity of the document, since there still needs to be an appeal opportunity and legal review before the process is complete.

However, she said the document does match Space Force formatting for a memorandum of record supporting an Article 15, which includes nonjudicial punishment such as a reduction in rank.

“Members who fail to adhere to the Space Force’s expectations and standards are held accountable by their respective leadership with the goals of reforming behavior and maintaining good order and discipline,” said Space Force spokesperson Meaghan Dorroh in an email to Task & Purpose.

The letter has remarkable timing: it was posted just days after Space Force trounced American and British military teams at a Call of Duty tournament. As the letter clearly demonstrates, Space Force members will put their careers on the line to maintain their gaming dominance. We can only hope they employ a similar ferocity in their fight for American interests in the final frontier. Semper Supra!