When droves of residents, business owners, and community members attended a Boston, Massachusetts Zoning Board of Appeals meeting Nov. 14,... 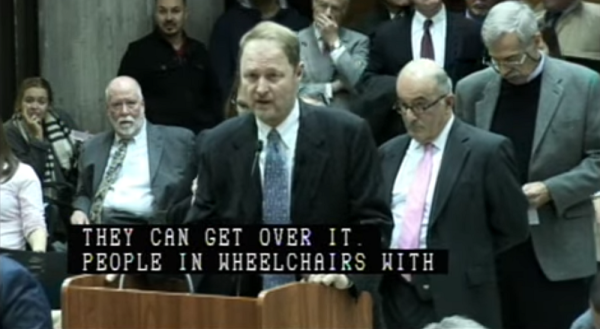 When droves of residents, business owners, and community members attended a Boston, Massachusetts Zoning Board of Appeals meeting Nov. 14, it was to state their support or opposition to a proposed medical marijuana dispensary opening in the upscale Back Bay neighborhood. Most of the three-hour long deliberation — which was recorded for public record — was pretty tame and about what you’d expect from city council meetings, until one man took it just a bit too far.

“All of my friends and I are against this because it'll bring undesirable elements into the neighborhood, and just so you know what I mean,” local Oliver Curme, who lives around the corner from the proposed dispensary, said, shocking other attendees who are seen visibly disagreeing with him. “There are Army vets with PTSD and we don’t want them in the neighborhood. Just give me a break, they can get over it.”

Curme went on to say he objected to the dispensary because it would bring in “people with wheelchairs, with [Multiple Sclerosis], whatever,” while doing an impersonation of someone with the disease. He also targeted women with breast cancer, who, he said “all have that cadaverous look” and “wear those ridiculous turbans.”

The rant quickly went viral on Nov. 15 after Boston Globe reporter Dan Adams tweeted the video, and viewers debated whether Curme was actually serious or playing some sort of prank.

Also, I don't know if this guy was kidding. Stay tuned.

When you spend your entire evening embroiled in the #OliverCurme saga only to find it out it was the world's weirdest performance art. https://t.co/IKGSxVdgj6

By Wednesday, Curme had his own hashtag trending on Twitter, and by the time he spoke with NBC Boston that evening, he knew he was in deep shit.

“It was a caricature. It was satire,” he said in an interview. “If you listen to what I said it was so over the top that I think it’s the only way they could have been construed.”

Though Curme claims it was all an elaborate performance meant to undermine the dispensary’s opposition, his methods have raised some questions, like whether or not he did more harm than good. Following the hearing, Mike Ross, the councillor defending the dispensary, told The Boston Globe that he had “never in my life heard anything so appalling.”

However, others figured that it was just too outlandish and offensive to be real.

“The point that I was trying to make is a marijuana dispensary will bring in the people who really need this, people who are sick, people who have cancer, and this is the only choice for them,” Curme, a retired venture capitalist, told NBC Boston.

Curme even claimed that he lived in Burrage Mansion, a lavish and opulent historic landmark in the neighborhood and home to a condo once owned by Patriots quarterback Tom Brady. Want to come across as a rich snob and draw the ire of everyone else in the room? Tell everyone that you live in the biggest, fanciest house in town. (It’s unclear if he actually lives in the multi-million dollar estate, or if that was an attempt to telegraph that this was, in fact, a joke.)

To Curme’s point — that this was an attempt to lampoon his snobbish neighbors — his remarks hit all the right notes to inspire immediate outrage and encourage people to support the dispensary.

Who knows for sure, but maybe Curme’s shtick worked? According to The Boston Globe, the Zoning Board of Appeals’ seven members voted unanimously in favor of the dispensary.