Veteran Who Killed Himself Amid UC Davis Scandal Discriminated Against For Service, Lawsuit Claims

A lawsuit filed on behalf of the widow of a retired Air Force logistics officer and newly hired UC Davis... 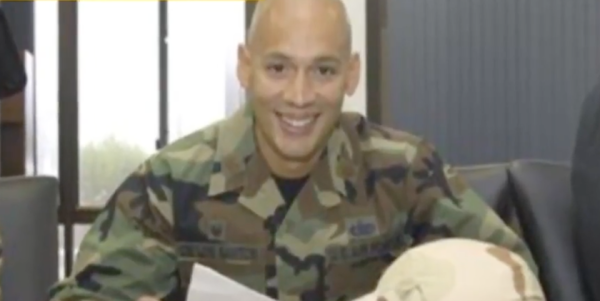 A lawsuit filed on behalf of the widow of a retired Air Force logistics officer and newly hired UC Davis employee who killed himself in 2015 after colleagues accused him of sexual assault alleges that the university drove him to suicide by levying a harsher punishment against him because of his military service, the Associated Press reports.

Col. Christopher de los Santos was the focus of an internal investigation launched following a raucous staff retreat in October 2015, during which De Los Santos, at the time a chief of a branch of UC Davis’s department of entomology and nematology, allegedly stripped naked and invited subordinates to take a bath with him. The suit claims that the university notified De Los Santos, a 23-year Air Force veteran, of the accusations via email and told him to stay away from campus.

Shortly after receiving the notification, De Los Santos drove into an empty field in Rio Linda, California and shot himself. A husband and father of two, De Los Santos had joined the UC Davis staff less than four months before. His last assignment with the Air Force was as commander of the 673rd Logistics Readiness Group at Joint Base Elmendorf-Richardson, Alaska.

According to the lawsuit, De Los Santos was subjected to exceptionally harsh punishment because he was a veteran, and that university administrators violated federal and state discrimination laws.

The lawsuit argues that some administrators requested that De Los Santos be notified of the suspension while he was away from campus “because he ‘might show up with a gun’ and/or ‘need to be escorted off campus by security’ due to his military background.” The suit also alleges that other employees who had been accused of sexual harassment in the past had not been suspended from work, The Sacramento Bee reports.

“For them to have a knee-jerk reaction because an administrator in the Air Force might somehow be violent because he’s been in the military, I mean that’s blatant discrimination,” Annabelle Robertson, the De Los Santos’ attorney, told CBS Sacramento on Oct. 31, 2017. “This man had served his country for 23 years on active duty, and he had a chest full of medals.”

One of De Los Santos’ colleagues described the October 2015 university trip to a lettuce-growing operation near Monterey as a “booze cruise.” The retreat involved 17 members of the school staff, some of whom reportedly began drinking during the three-hour car ride to the hotel where they were staying. An evening of heavy partying ensued.

Three staffers told investigators that De Los Santos got progressively drunk during the festivities and at some point after midnight appeared in a bathroom where some of his colleagues were washing up and proposed a group bath. “The next thing I know is that he is standing there in the bathroom naked and he went into the tub,” one staffer is quoted saying in the report.

“There’s no question in my mind, in the minds of our veterans’ suicide expert, that Col. De Los Santos assumed that these allegations would be the subject of dramatic coverage, that he would potentially be arrested and tried in a court of law, and potentially recalled by the military to be tried under the Uniform Code of Military Justice, and that is precisely the reason that lawmakers have protected veterans from discrimination in employment,” Robertson told The Sacramento Bee. “The risk for suicide is, sadly, extremely well known and widely publicized, and was at the time.”

UC Davis insists that De Los Santos’ punishment was not unique, saying in a statement to CBS Sacramento that “ many of the employees who attended the retreat were not involved in any improper conduct, those who were received appropriate disciplinary action.”

“With sympathy to the De Los Santos family,” UC Davis added, “the University maintains that the filing of this lawsuit is an unfortunate development in an already tragic situation.”