The Army Is Offering Mental-Health Waivers, But Don’t Freak Out Just Yet

The morning after Veterans Day, USA Today published an investigation that rippled through the Army community: This August, for the... 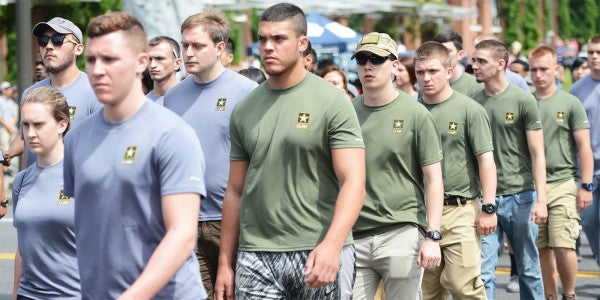 The morning after Veterans Day, USA Today published an investigation that rippled through the Army community: This August, for the first time since soldier suicides spiked in 2009, the service began offering waivers to recruits with histories of drug and alcohol abuse, depression, bipolar disorder, and “self-mutilating” behaviors like cutting — conditions that previously disqualified would-be enlistees.

The reason for the apparent watering down of standards, USA Today suggested, was “a reaction to its difficulties in recruiting,” part of a broader Army trend to meet “recruiting goals by accepting more marginally qualified recruits.”

That’s quite an assertion — one that’s been on many military members’ minds since the sentencing hearing this month of Bowe Bergdahl, the soldier held by the Taliban for five years after he walked off his post in Afghanistan. Subsequent investigations showed that Bergdahl had persistent mental-health issues and had been discharged from Coast Guard boot camp for psychological reasons before he was waived into the Army. Other services, too, have faced scrutiny, as when the Air Force announced last January that it was opening up waivers for eczema, asthma, ADHD, and marijuana use.

So is the Army opening up a Pandora’s Box of troubled recruits to make numbers? Not exactly. Reports of a Green Machine Apocalypse are grossly exaggerated, according to one Army recruiter with knowledge of the process who spoke to Task & Purpose on condition of anonymity because he was not authorized to speak publicly.

“Just because they say they are opening it up doesn’t mean they will let anyone in,” the recruiter said.

In fact, if anything, the new waiver process could actually improve the overall quality of recruits joining the Army this year.

While USA Today’s report was light on details about the waiver process, the recruiter told T&P; that the new waiver policy is actually part of a broader trend to let more local recruiting commanders make more judgment calls on would-be recruits. “The Army has been trying to make small changes here and there to make things easier for lower-level leaders,” he said.

The recruiter cited the case of an otherwise-qualified recruit in his district who had worked a few years in a hands-on construction trade, “so his arms had a lot of small scars.” A doctor at the Military Enlistment Processing Center who saw the recruit’s scars “said he was a self cutter and medically disqualified him on the spot.”

“It took us three months to get the determination overturned,” the recruiter said, “but most times once someone is declared permanently disqualified from MEPS, the recruiting command leadership isn’t willing to waste time.” The new waiver process, the recruiter figured, would allow “for some sort of rebuttal in those circumstances.”

High Army recruitment goals probably factored into the new waiver policy, but not necessarily in the way outsiders might imagine. In fiscal 2017, the Army grew at the fastest rate in the history of the all-volunteer force, and the population of lower-quality recruits grew with it: As USA Today pointed out, the (still very small) share of soldiers who were “Category 4” — the lowest ASVAB scorers — tripled last year, and marijuana waivers more than doubled. President Donald Trump has signaled he wants the Army to be bigger yet — and quickly, with a goal of recruiting 80,000 new soldiers in fiscal 2018.

Army planners know they’re not going to hit that quota, the recruiter told Task & Purpose, and so they’re focusing on enlisting as many high-quality recruits as possible — particularly so-called “Class A” applicants, who score 50 or better on their ASVAB. Opening up waivers for Class As with certain mental-health conditions means the Army can access those higher-quality recruits before those with lower overall military aptitude.

“My boss told me that they only want us to focus on the alphas,” the recruiter told T&P;, adding that the Army’s recruiting command “is saying that if you’re going to miss the mission, we want you to miss the mission because you didn’t enlist any bravos.”

The attitude, the recruiter said, is “As long as you missed mission on the lesser quality contracts — or ‘dumb people’ — it’s OK.”

The recruiter also says he thinks that the ultimate number of new mental-history waivers — which hasn’t yet been disclosed by the Army — will be low; waiverable conditions are still disqualifying unless and until military authorities decide otherwise.

“The thing is that all treatment records pertaining to self-harm have to be annotated and sent up for a waiver. Then that has to get weighed against all the other medical qualifications” that a recruit may present, like depression, anxiety, suicidal thoughts or attempts, he said.

Just because recruiters are opening one door for recruits with limited histories of mental issues, he added, “doesn’t mean we will open the others.”

In the meantime, if the Army’s really hard-pressed to get more otherwise highly qualified recruits, it could always always reverse last month’s decision to delay or deny enlistments for permanent legal residents with green cards.