Army leaders say China can learn an important lesson from Russia in Ukraine: Don’t ‘piss everybody off’

“I think what we hope they’ll learn is that national sovereignty is in fact something that is valued by its citizens.” 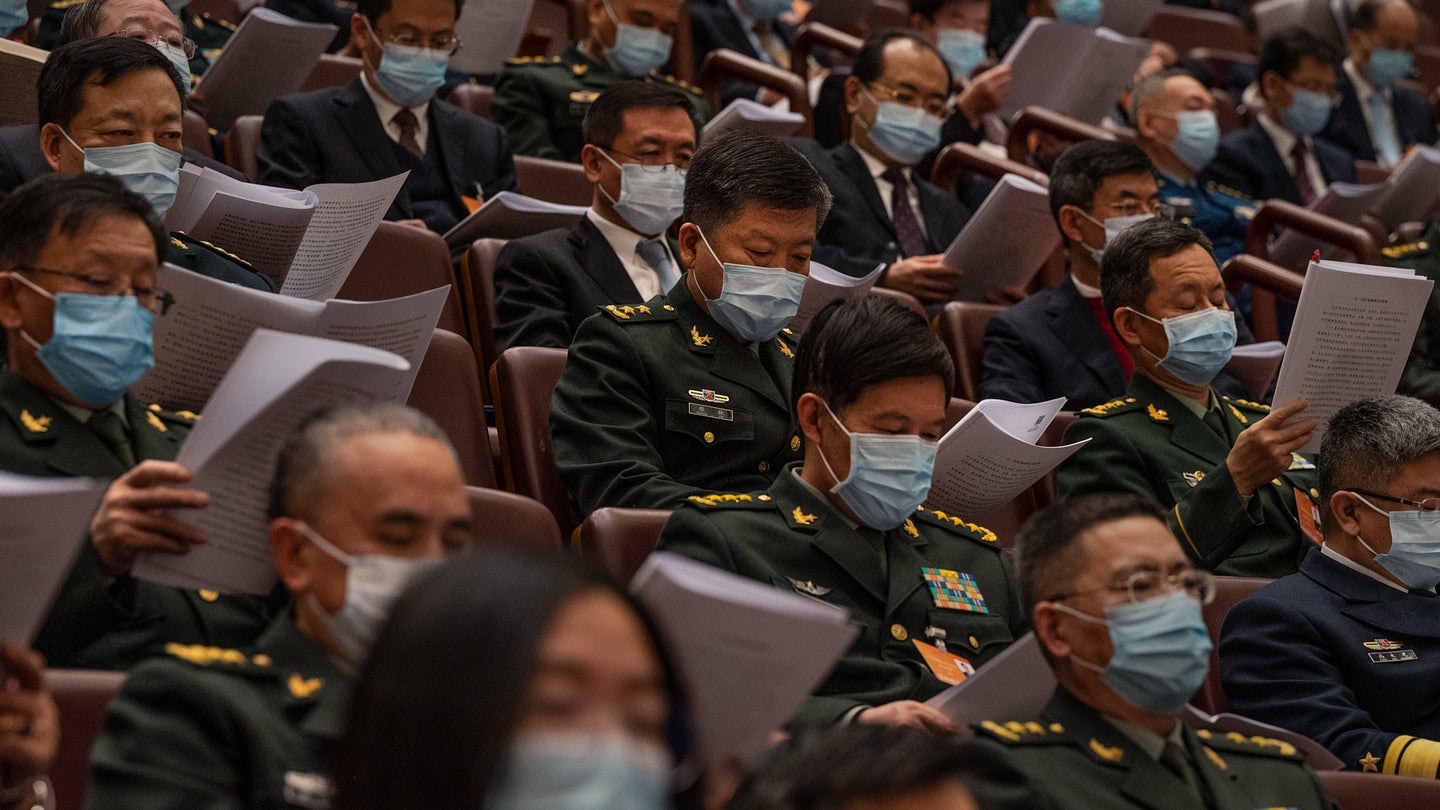 Attendees, many from the Chinese military, listen in the gallery at the opening session of the National Peoples Congress at the Great Hall of the People on March 5, 2022 in Beijing, China. (Kevin Frayer/Getty Images).
SHARE

For the last six and a half months, the world has watched Ukraine fight back against the Russian invasion with the help of allies around the world. U.S. Army leaders in Hawaii hope that China is as well — and maybe even learning a thing or two.

Maj. Gen. Joseph Ryan, commander of the Army’s 25th Infantry Division, said on Aug. 29 that he hopes it’s clear to the Chinese Communist Party that a “heavy-handed approach” will only result in “very temporary gains.”

“This is a big region with a lot of people,” Ryan told reporters from Task & Purpose and the Wall Street Journal. “And if they’re going to piss everybody off, that’s not going to be a solid way forward for them.”

Indeed, the U.S. military has a network of partners in the Pacific who train together, including Australia, Japan, South Korea, New Zealand, Australia, Thailand, and the Philippines, as well as Brunei, Papua New Guinea, the Solomon Islands and Malaysia. There are just under 40 “key exercises” that the U.S. does throughout the year with those partners in the region, Brig. Gen. Jay Bartholomees, the operations chief for U.S. Army Pacific, told Task & Purpose.

For years now, the Army has maintained that it will be critical in a fight against China. The service has reflected that priority in its overhaul of how it trains its captains, ensuring that its future leaders are read up on both the Chinese and Russian militaries. And for service leaders in Hawaii, a possible war with China is — unsurprisingly — the elephant in every room.

China’s willingness to “push its weight around” is “disturbing and distressing,” Ryan said, and something that other countries in the region are taking notice of. They’re “finally coming to grips with that, that this is not trending in a good direction,” he said, which is why army-to-army partnerships with those countries are so crucial.

The Army is indispensable because of how many chiefs of defense in the Indo-Pacific come from an Army background, Bartholomees said, which means they’ve likely trained with the U.S. Army before.

“Just starting from here as a major power all across the region, most of these are armies, so our relationship, the United States Army’s relationship … has strategic implications in terms of relationships,” Bartholomees said. “And that kind of leads to this challenge of China.”

Ryan echoed similar thoughts, saying that while there is some partnering on the Navy and Air Force side, “those countries don’t have air forces and navies and marine corps like we do. They have armies.”

The world has already seen the benefit of regular training with foreign militaries in Ukraine, Bartholomees said. U.S. service members have worked with Ukraine for decades. He recalled training with the country as the 173rd Airborne Brigade commander in Europe years ago, for example, and Air National Guard pilots from California have worked with Ukraine since 1993. Just days before Russia’s invasion of Ukraine, Florida National Guard soldiers who’d been deployed there to help train Ukrainian forces were taken out of the country.

And that training has appeared to pay off. Army Lt. Col. Jeremy “Todd” Hopkins, deputy commander of the Florida National Guard’s 53rd Infantry Brigade Combat Team, said in May that Russia’s “biggest mistake … was giving us eight years to prepare for this [war].” Since then, the Ukrainian military has re-taken swaths of territory from Russia as Russian forces retreat.

“It’s definitely heartening to see the results, as grim and gruesome as they are,” Bartholomees said. “That conflict is causing all of us to think differently about this threat here, because we realize there is a force that’s capable of taking action.”

In the Indo-Pacific, Bartholomees said there’s “great concern” in regards to Taiwan after watching Russia and Ukraine. China has ramped up the pressure on Taiwan over the last few months; Politico reported at the beginning of this month “near-daily incursions” from Chinese military aircraft “across the halfway point in the waters between China and the self-governing island.” And in August, China launched short-range ballistic missiles over the shores of Taiwan in what was their largest-ever military exercise around the island. Taiwan “may be the nightmare scenario,” Ryan said, but he doesn’t believe it’s the “end-all be-all.”

In a vast majority of cases, Bartholomees said that countries who previously may have turned towards China for support are reconsidering and thinking about how “their national sovereignty is potentially at stake with what’s happening.” It’s become a top-of-mind concern, he said, especially when Russia invaded Ukraine.

When the invasion began, Bartholomees said the first question Gen. Charles Flynn, commander of U.S. Army Pacific, was asked by allies was, “Are you going to leave and have to go defend” Ukraine?

“His natural answer was, ‘No. My mission is here, and our mission is here. Our forces are here because of the importance of this region, we’re not going anywhere,’” Bartholomees said. “And that was stark for him because it really made him think, everyone’s really watching what’s happening … But the second thing that came up was each of these nations really started thinking hard about, ‘What about us? What about our national sovereignty? If this could happen to Ukraine, what could happen in this region?’”

Ryan agreed that something he believes China likely takes notice of is how the U.S.’ partnerships with countries in the region “that otherwise would be teetering in the other direction” have grown. He used the Philippines as an example, in how they recently scrapped a deal for Russian Mi-17 helicopters.

Ultimately, Bartholomees said that the lesson for China lies in the Ukrainian people’s resolve. Russia has seen civilians fight for their country in a way “I don’t think they probably expected,” Bartholomees said, and China would be wise to note that for the future.

“I think what we hope they’ll learn is that national sovereignty is in fact something that is valued by its citizens, that citizens will stand up and fight for their freedoms,” he said. “That democratic societies that desire to sustain their freedoms are willing to fight and die for them.”