After training together for years, Air Force pilots are watching Ukrainian friends fight for their lives

“We know these guys are professionals. They want to be in control of their own destiny." 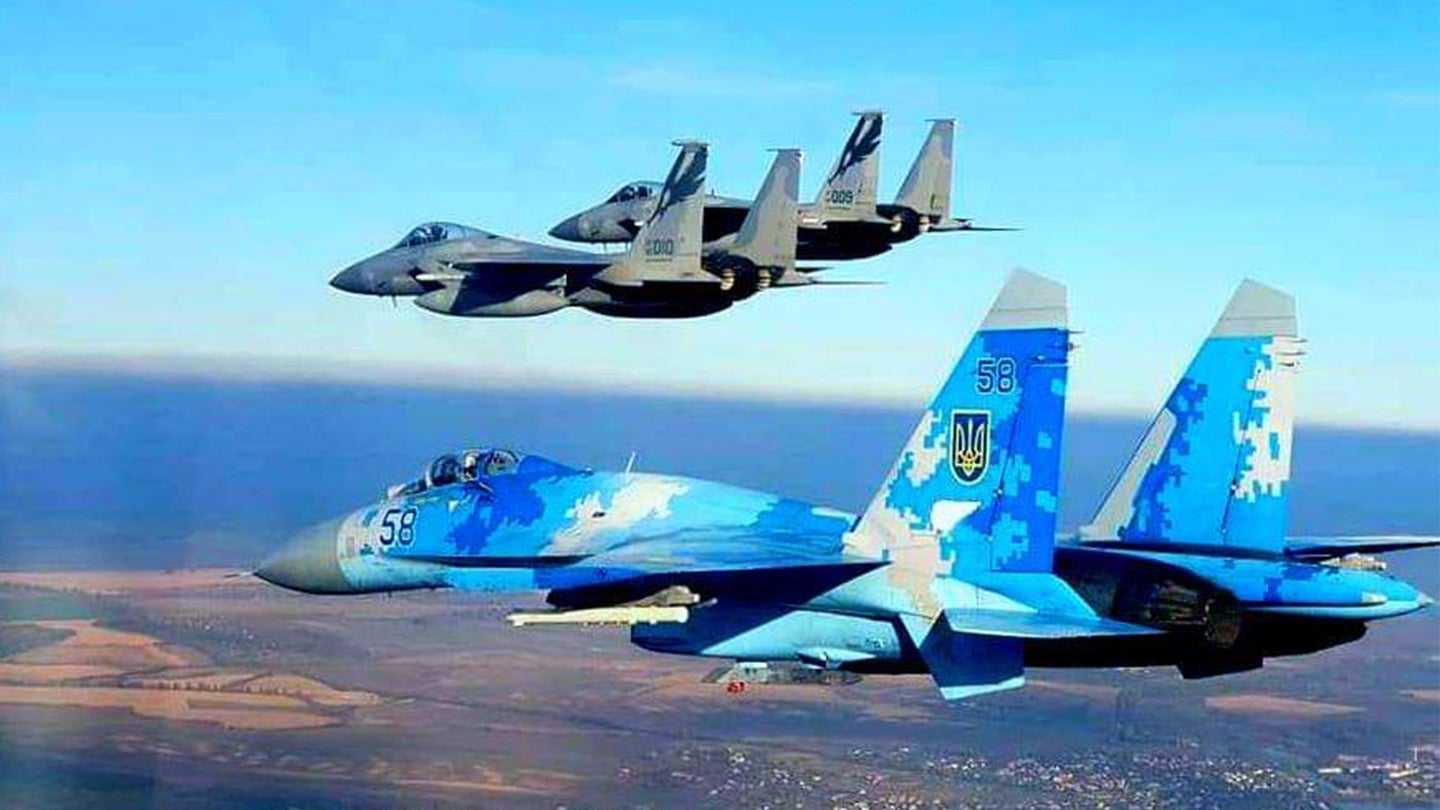 When the Russian military first invaded Ukraine on Feb. 24, the world was amazed at how the outgunned and outmanned Ukrainian Air Force held out against its much larger, more advanced Russian adversary. But for one group of American aviators, it was hardly a surprise. After all, they spent the past 29 years training with the Ukrainians and knew the pilots were tougher than experts predicted.

“Nobody in the 144th was surprised,” said Col. Robert Swertfager, a fellow F-15 pilot and the operations group commander for the fighter wing. “We know these guys are professionals. They want to be in control of their own destiny, to have the right to self-determination as their own country.”

Swertfager has been to Ukraine about 70 times since 2002 as part of the National Guard’s State Partnership Program, where the militaries of a dozen former Soviet Bloc countries paired with the National Guards of U.S. states. The program started in the early 1990s, and it has since expanded to 93 countries around the world. Despite the bigger scope, the program objective remains helping foreign militaries develop best practices and “helping the nations know how a military works in a democracy,” according to a Department of Defense press release.

In Ukraine, that took the form of swapping ideas in classrooms, flying together, and helping Ukrainian pilots develop their own culture of self-improvement. Often the rules changed about what specific tips and tricks the U.S. could provide based on which U.S. president was in office, but the focus was always on building bonds with Ukraine’s Air Force and helping Ukraine’s airmen be the best they could be.

“I’ve hosted Ukrainians at my house and I’ve been to several Ukrainians’ homes, too,” Swertfager said. “And it’s not just me, this is what the relationship is about.”

‘They’re on par with us, just using different equipment.’

When the 144th first started training with the Ukrainian Air Force, the country had just split off from the Soviet Union and was slowly shifting away from Soviet organization and doctrine to a more Western style of fighting, the colonel said. But some of the old ways of doing things still pop up in amusing ways. For example, Armey said that when U.S. pilots intercept other aircraft behaving suspiciously in American airspace, they often dump flares as a low-risk warning shot to get the intruder’s attention. Ukrainian pilots take ‘warning shot’ a bit more literally, a risky strategy high above the ground.

“They’ll ask, ‘have you ever tried a warning shot with the gun? You should try it,’” Armey said. “I don’t think we’re ever going to try that.”

The same hardball mindset applied to base security. When asked about a fence surrounding a Ukrainian airbase that needed some work, the local airmen said “it’s okay, we have a minefield on the other side,” Armey recalled. “So we were like ‘oh ok I guess you’re all set then.’”

It makes sense for Ukraine’s Air Force to take such serious measures: after all, they have been more or less at war with Russia since 2014. In fact, when U.S. pilots train with Ukrainians, the Europeans often have hairier war stories than the Americans. Armey recalled a MiG-29 fighter pilot saying he was equipped with a submachine gun and grenades in the cockpit, which is a pretty intense loadout considering many U.S. pilots often carry just a pistol or, at most, a compact rifle in case they are shot down. But the extra gear came in handy when the Ukrainian pilot was downed by a surface-to-air missile over the contested Donbas region and “he basically fought his way out with the help of rescue forces,” Armey said.

In a similar vein, a Ukrainian Su-24 fighter pilot told Armey about the time he was hit over Donbas by a missile fired by a man-portable air defense system (MANPADS) yet managed to land with his Su-24 on fire. Other pilots recalled flying a mere 50 to 100 feet above the ground to get close to a target while avoiding enemy surface-to-air missiles. For context, the best U.S. Air Force F-16 fighter pilots train at 100 feet above the ground, and while they probably could go lower in combat, it’s generally not worth the risk in training, Armey said.

“My impression of their guys is that they are very skilled,” he added. “They have by far better firsthand experience in how Russians actually fight wars.”

All of that firsthand experience led the F-15 driver and his fellow pilots to believe that their Ukrainian buddies were much more prepared for a full-scale brawl with Russia than many experts predicted. Still, Ukraine’s fleet of combat aircraft before Feb. 24 was a fifteenth the size of Russia’s, according to Flight Global’s 2022 World Air Forces directory. Ukraine’s fighter fleet is also lower-tech than Russia’s, which has enjoyed upgrades to its radar system to allow Russian pilots to see farther beyond visual range, Armey explained.

But what Ukraine lacks in numbers and technology, it makes up for in skill and teamwork. Despite flying outdated jets, Ukrainian pilots know how to work closely with ground-based air defenses like S-300 surface-to-air missiles. That integrated air defense is “a tough nut to crack” even for the world’s most advanced air force, Armey said.

“We emulate those threats at Nellis [Air Force Base] and those are serious missions where we take losses,” especially without the fifth-generation F-35 or F-22 fighters that have the stealth to mitigate those threats, the pilot explained.

The challenge is even more difficult for Russia, which does not put on large, enormously expensive training exercises such as the U.S. Air Force’s Red Flag, where U.S. and NATO pilots learn to fly complex air superiority missions and take on integrated air defenses.

“These combinations of systems are very difficult for the Russians to handle,” Armey said. “From an efficacy standpoint the Ukrainians are making the most of what they have.”

As Swertfager put it, Ukraine’s pilots could stand their own in the U.S. Air Force. “They’re on par with us, just using different equipment,” he said.

‘These are people to us.’

Both Swertfager and Armey have friends who have shot down Russian aircraft in the past few weeks. The exact total of Russian and Ukrainian aircraft lost so far is unclear. On the Russian side, at least 35 helicopters and 15 fixed-wing aircraft have been damaged or destroyed, though the Ukrainian Ministry of Defense claims to have killed 81 planes and 95 helicopters as of Thursday. Ukraine’s Air Force has lost at least 12 aircraft and one helicopter. While it’s tempting to celebrate Ukraine’s victories, the war is far from over.

“Yes we’re excited for our buddies, but they’re still under constant attack, still outnumbered and still under threat,” Swertfager said. “Pilots are very superstitious … and I think celebrating somebody’s aerial victories is dangerous because you don’t want to jinx yourself.”

For members of the 144th Fighter Wing and for service members across the California National Guard and Air National Guard, the war in Ukraine is not a faraway headline. It is a personal affair involving friends and connections they have enjoyed for years. They have had dinner in each other’s homes both in Ukraine and in the U.S; they have taught each other fighter pilot songs; messaged each other about promotions; and often flown together.

“Fighter pilots anywhere are birds of a feather, so we immediately feel a kinship with Ukrainian pilots and vice versa,” Swertfager said. “It’s an amazing thing to be a part of, so of course this situation has been very difficult.”

The war is even closer to home for Armey, who met his wife Anastasiia in a karaoke bar in Ukraine while on a state partnership visit. Several of Anastasiia’s friends and family members left the country, but many stayed behind to help fight Russia.

“We know people who dropped their kids at the border and are going off to fight,” Armey said. “They are not trained military, and they are going to learn how to fight an enemy that’s much better equipped than they are. That’s really hard to see. I appreciate their bravery and sacrifice but these are people to us, people with faces and families that we’ve met.”

To help them out, Armey and Anastasiia started a fundraiser that gets much-needed supplies into the hands of the Ukrainian fighters and aid workers who need them. Those supplies include survival radios for pilots and QuikClot bandages for medics. With their many connections in Ukraine, the couple know exactly what’s needed on the ground.

“These supplies don’t cost a lot of money, but it makes a big difference for them,” Armey said.

Armey is not the only one trying to help: Swertfager and other California Air Guardsmen are working with the Air Force’s European command as experts on Ukraine’s pilots and airpower.

“A lot of us are combat vets but none of us have defended our homeland,” the colonel said. “And that’s why a lot of us have come over to advise [U.S. Air Forces in Europe] on what the Ukrainian Air Force is like.”

How much longer Ukraine’s air force will need to hold out is still unclear. Despite their tactics and training, Ukrainian pilots have only so many jets to go around, and each one lost is more difficult for them to replace than it is for Russia. Reports also show that despite its lack of air superiority, Russia is launching long-range munitions from aircraft flying outside Ukraine’s airspace and targeting civilians with horrifying results. Still, don’t expect Ukraine’s pilots to give up the fight any time soon.

“A lot of Ukraininans associate themselves with early America, fighting for their independence,” Swertfager said. “They are committed to what they’re doing.”