"Penetrating contested airspace is only part of the challenge — and it may not even be the most important one." 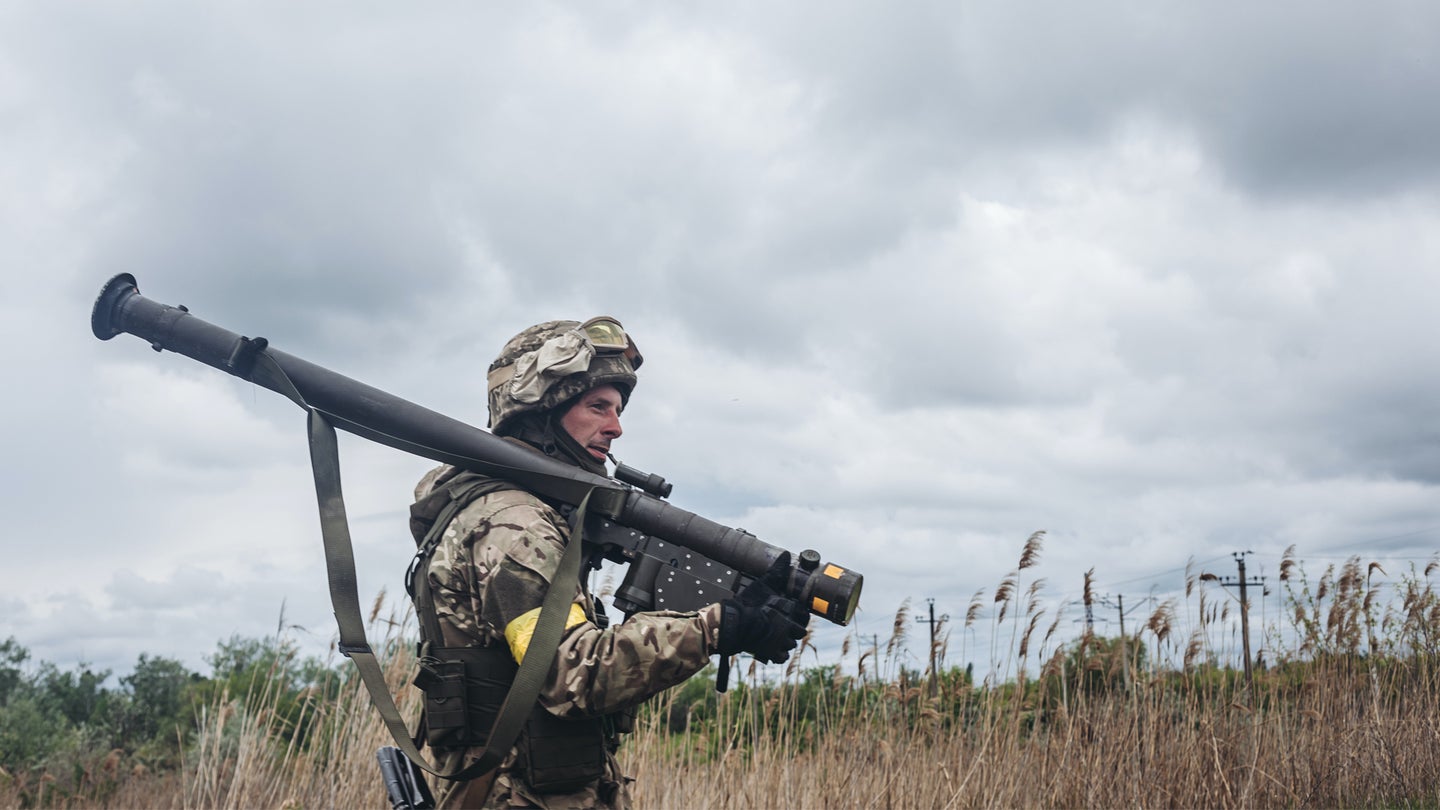 A Ukrainian soldier is seen with an anti-aircraft weapon in Donetsk Oblast, Ukraine on May 14, 2022. (Diego Herrera Carcedo/Anadolu Agency via Getty Images).
SHARE

There’s an old sports cliché that offense sells tickets, but defense wins championships — and the U.S. Air Force may learn a thing or two from seeing it play out in the Russian invasion of Ukraine.

That’s because Ukraine, despite having a smaller, lower-tech air force than Russia, has managed to keep Russian aircraft largely out of the country through the clever use of mobile anti-aircraft missile launchers and their knowledge of the terrain, according to a recently-published essay by airpower experts.

This development, plus the widespread proliferation of small, cheap drones and precision strike capabilities, should serve as a wake-up call for Air Force leaders who have spent billions of taxpayer dollars on a small number of high-end manned aircraft they hope can achieve air superiority in America’s next war.

“[T]he air war in Ukraine, where neither side controls the skies, suggests that denying air superiority is sometimes a smarter operational objective than trying to gain it outright,” wrote U.S. Air Force Col. Maximilian Bremer and Kelly Grieco, a resident senior fellow with the New American Engagement Initiative at the Atlantic Council’s Scowcroft Center for Strategy and Security, in an essay for War On the Rocks on Wednesday.

Instead of focusing on air superiority, where friendly aircraft can move without interference from opposing forces, the Air Force should emphasize air denial, where friendly forces work to deny the enemy the use of the air domain, Bremer and Grieco wrote. The reason is simple: Almost since the beginning of the conflict, both Ukrainian and Russian jets have been either grounded or sent to low altitude because of the threat of long-range anti-aircraft missiles. Flying at low altitude may evade the radar those missiles use to lock onto an aircraft, but it also puts the aircraft at risk of being hit by anti-aircraft artillery and shoulder-fired man-portable air defense systems (MANPADs).

Russia has tried to destroy Ukraine’s anti-aircraft missiles from far away by using the launchers’ radar signals to detect them. But Ukraine has proven adept at using “shoot and scoot” tactics, where they fire missiles and rapidly flee the launch site.

“After firing, the defender can turn off the radar, pack up and drive away to hide in the ground clutter — forests, buildings, etc.,” Bremer and Grieco wrote, and the proof is in the pudding: According to the open-source intelligence site Oryx, 30 Russian combat aircraft and 45 helicopters have been destroyed, but only 24 out of Ukraine’s 250 S-300 long-range anti-aircraft missile launchers have been lost.

Bremer and Grieco cautioned to take those numbers with a grain of salt, considering “how Ukrainian officials carefully manage information about their losses.” Still, the relatively low loss of Ukrainian air defense systems show that they can continue to deny Russian use of the air with low risk of a successful response. The Pentagon is seeing a similar trend.

“[W]e continue to see the Russians wary of venturing into Ukrainian air space at all and if they do, they don’t stay long,” said a senior U.S. defense official on May 10. “I think that says — that speaks volumes about how contested the air space is over there.”

The U.S. Air Force is rightly proud of its record of air superiority, to the point where top service brass often points to April 15, 1953, as the last time an American ground forces service member was killed by an attacking enemy aircraft. However, in future conflicts, the contested air war in Ukraine “is likely to be the rule rather than the exception,” Bremer and Grieco argue.

This point is not lost on Air Force officials, who have spent years preparing to fight in contested airspace against China or Russia. However, Bremer and Grieco write that Air Force planners are still overly-focused on developing expensive manned aircraft to strike deep into enemy territory and wrestle out some form of air superiority anyway.

“U.S. Air Force leaders and defense analysts recognize the United States can no longer take air superiority for granted,” they said. “But their solutions amount to searching for a technological silver bullet that can nonetheless guarantee it.”

Silver bullets do not seem to be the direction war is going at the moment. Instead, Bremer and Grieco point out that it seems to be going towards lots of very cheap bullets. They pointed out Iran’s use of “combat drones, land-attack cruise missiles, and precision-guided short-range ballistic missiles against ISIL in Syria, Saudi oil facilities, and a U.S. air base in Iraq.” In the Nagorno-Karabakh conflict between Armenia and Azerbaijan, Azerbaijan also used “combat drones with loitering munitions and precision-guided artillery” on Armenian troops.

Considering all this, Bremer and Grieco observed that “small- and medium-sized states … will seek to acquire such capabilities for themselves, ushering in an age of increasingly roboticized air forces with precision-strike capabilities that are effective but less costly than traditional manned combat aircraft.”

If small- and medium-sized states can also get their hands on similar anti-aircraft systems like the S-300s that Ukraine is using, it could pose a threat to those traditional manned combat aircraft.

“We emulate those threats at Nellis [Air Force Base] and those are serious missions where we take losses,” especially without the fifth-generation F-35 or F-22 fighters that have the stealth to mitigate those threats, Maj. Drew Armey, an F-15 fighter pilot with the California Air National Guard’s 144th Fighter Wing, told Task & Purpose in March.

The U.S. is one of the few, if not the only nation that can effectively counter such enemy air defenses, but it’s not easy. Airpower expert Justin Bronk laid out the long to-do list for taking out a large-scale enemy air defense network in an April essay for the United Kingdom defense think tank, Royal United Services Institute.

Those missions also require sophisticated planning by well-trained intelligence officers, vulnerable battle management and intelligence aircraft to guide and coordinate the strike package, and equally vulnerable aerial refueling tankers to keep the whole formation gassed up throughout the mission. Those missions are difficult to arrange even against lower-tech threats such as the Iraqi military in Operations Desert Storm and Iraqi Freedom. They would likely find it even more challenging against China, which is nearly as technologically advanced as the U.S.

While the U.S. also has long-range stealth aircraft like the RQ-170 drone and the B-2 Spirit bomber, these assets are too expensive and too scarce for taking out a large-scale medium and short-range air defense network, Bronk wrote. The U.S. also has fifth-generation F-22 and F-35 stealth fighters designed to sneak past enemy radar systems. But these systems are too few and too expensive to survive a protracted conflict like the one in Ukraine, Bremer and Grieco argued. They pointed out the F-22, which, at $250 million a piece, is nearly a 400 percent increase over the $65 million F-15 Eagle it replaced. The increase, the experts noted, is consistent with a comment made forty years ago by former Army undersecretary Norman Augustine.

“‘In the year 2054, the entire defense budget will purchase just one aircraft. This aircraft will have to be shared by the Air Force and Navy 3-1/2 days each per week except for leap year, when it will be made available to the Marines for the extra day,’” Augustine said.

Hopefully, the U.S. military won’t get that bad, but there still may not be enough aircraft to win a protracted conflict.

“In a great-power conflict, the United States will lack the superior aircraft numbers (mass) to win a long and destructive war of attrition,” Bremer and Grieco wrote.

All this goes to show that air superiority as the U.S. Air Force has historically imagined may be very difficult to achieve in the near future, which is why planners may need to focus instead on America’s defensive game, air denial, and achieving limited windows of air superiority rather than making it a permanent state of affairs, Bremer and Grieco said. While the Air Force is pursuing “temporary windows of superiority,” its proposed means of doing so is the Next Generation Air Dominance fighter program, which is centered on a manned sixth-generation aircraft that could cost hundreds of millions of dollars per tail.

“[Lt. Gen. S. Clinton] Hinote defines the Air Force’s challenge as ‘how we’re going to penetrate into those contested areas and how we’re going to create that effect of air superiority,’” Bremer and Grieco wrote. “But penetrating contested airspace is only part of the challenge — and it may not even be the most important one. The other is denying those same advantages to the adversary.”

Such a move will require shifting away from a few expensive planes to swarms of thousands of cheap tiny drones, the experts said. However, it will also require shifting away from the cultural focus on manned fighters and bombers that has centered the service since its beginning in 1947. As a cherry on top, it will also require inter-service wrangling, since most of America’s air defense systems, such as Patriot missiles and Terminal High Altitude Area Defense, are operated by other services, they wrote. These are big challenges, but tackling them is preferable to defeat.

“By adopting an air denial strategy, the Air Force would aim to make it both difficult and costly for China or Russia to quickly seize territory and present it as a fait accompli,” Bremer and Grieco wrote. “This calls for a paradigm shift in American airpower thinking.”