The MiG-29’s entire identity has been inverted. 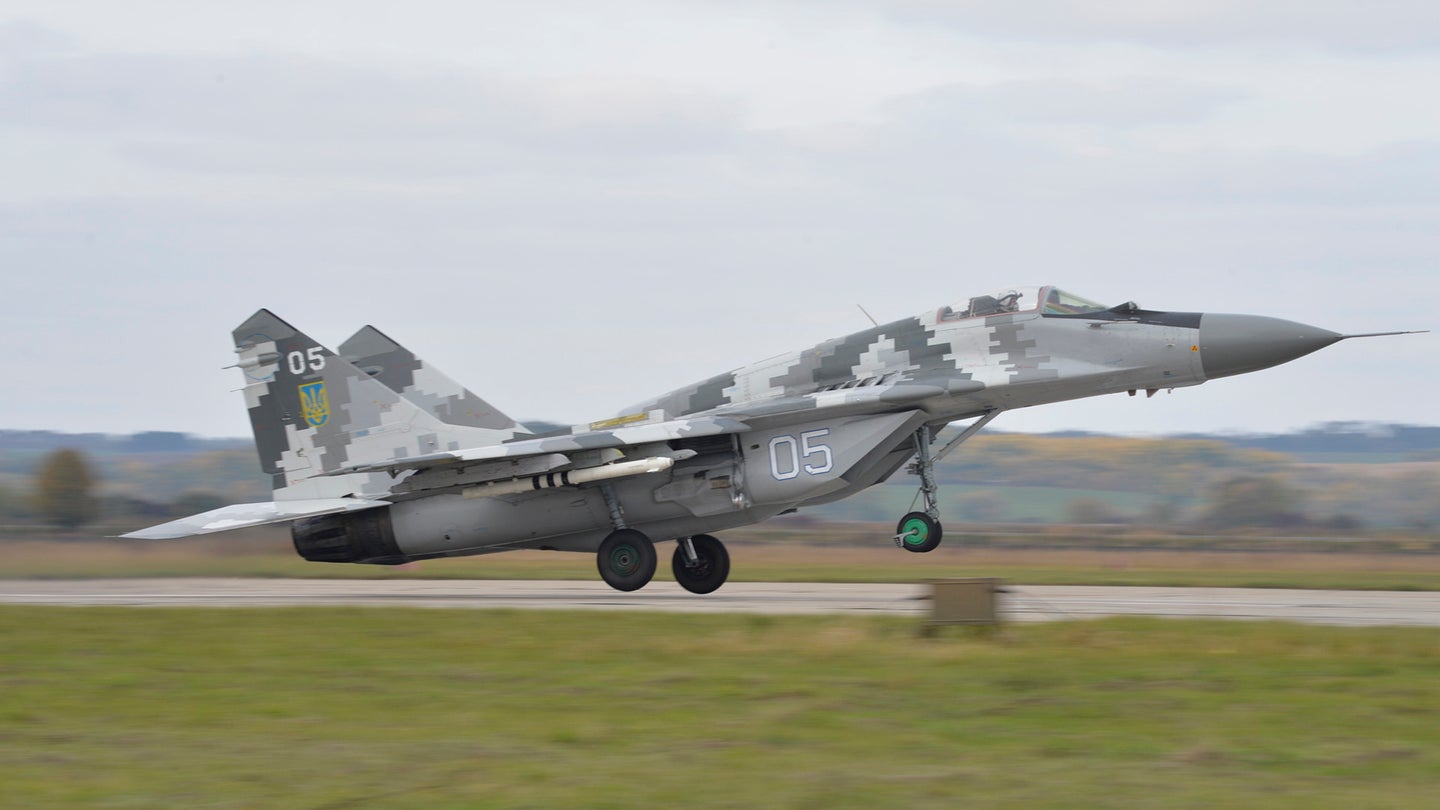 In the Cold War’s twilight, the MiG-29 was the heavyweight of Soviet fighter aircraft that American pilots longed to battle; but since Russia’s invasion of Ukraine in February, the MiG-29’s entire identity has been inverted.

Against the odds, Ukrainian pilots have managed to successfully fly their older MiG-29s against far more advanced Russian fighter aircraft and air defenses. Once feared as a menace to the free world, the MiG-29 has become a symbol of Ukrainian resistance in a modern-day Battle of Britain.

That’s quite a metamorphosis for the MiG-29, which was intended to destroy U.S., NATO, and any other enemy’s jet fighters when it first became operational in the 1980s. The plane was part of what the Soviet’s called the fourth generation of jet fighters, that included American F-15s, F-16s, and F/A-18s.

In September 1988, the MiG-29 dazzled audiences with its maneuverability at the Farnborough Air Show in England. One of the plane’s trademark moves was that it could go into a stall and slide backwards before recovering.

But when Ben Lambeth became the first American to fly in the MiG-29 back in 1989, he noticed that the fighter was very much a product of Soviet doctrine. Although the jet fighter is highly maneuverable, its cockpit is laid out in such a way that makes clear that its pilots were expected to take their orders from ground controllers, Lambeth wrote for a 1991 RAND Corporation report.

“The MiG-29 in its heyday actually was (and remains today) a highly maneuverable and effective performer in visual one-on-one aerial combat,” Lambeth told Task & Purpose. “Its maneuvering performance capability was on a par with that of the F-16. But the aircraft wasn’t fielded to be routinely operated in that manner. Its cockpit ergonomics and the situational awareness its sensors provided its pilots were highly substandard and undesirable by Western standards, and no experienced Western fighter pilot would ever want to go to war in a MiG-29 if an available alternative was an F-15 or F-16. Soviet pilots did not train for close-in maneuvering air combat because the MiG-29, like its predecessors, was designed from the ground up to be employed under the always close direction and supervision of a ground controller.”

Air Force Lt. Col. Fred “Spanky” Clifton was disappointed with many of the MiG-29’s design issues when he flew the jet fighter during an exchange with the German air force, which inherited two dozen of the aircraft after East Germany collapsed.

In a February 2015 interview with defense journalist Tyler Rogoway, Clifton described the MiG-29 as a simple aircraft that was reliable and easy to maintain, but it was not up to western standards.

“Its handling qualities are mediocre at best,” Clifton said. “The flight control system is a little sloppy and not very responsive. This does not mean the jet isn’t very maneuverable. It is. I put it between the F-15C and the F-16. The pilot just has to work harder to get the jet to respond the way he wants.”

Clifton also found that the MiG-29’s renowned infrared search-and-track-system, which supposedly allowed the fighter to stealthily track targets without using radar, turned out to be “next to useless and could have been left off the MiG-29 with negligible impact on its combat capability.”

“Overall, the MiG-29 was/is not the 10-foot-tall monster that was postulated during the Cold War,” Clifton said. “It’s a good airplane, just not much of a fighter when compared to the West’s 4th-generation fighters.”

And yet the Ukrainians have used their Soviet-era MiG-29s to prevent the Russians from gaining air superiority over their country.  Although stories about the “Ghost of Kyiv,” a Ukrainian pilot who supposedly shot down several Russian fighters, turned out to be a myth, real-life Ukrainian pilots are punching above their weight in their old aircraft.

The Ukrainians know how to coordinate their air operations with their air defenses, such as S-300 surface-to-air-missiles, to create an integrated air defense system that poses challenges for any adversary, Air Force Maj. Drew Armey, an F-15 pilot, told Task & Purpose’s David Roza in March.

“These combinations of systems are very difficult for the Russians to handle,” said Armey, who has helped to train Ukrainian pilots as part of the California Air National Guard’s 144th Fighter Wing. “From an efficacy standpoint the Ukrainians are making the most of what they have.”

Ukrainian pilots’ training has evolved since Russia first invaded their country in 2014 to stress flexible tactics and keeping their aircraft constantly on the move to avoid being destroyed in the ground, Thomas Newdick of The War Zone reported in April. During exercises with the U.S. Air Force, F-15s played the roles of Russian SU-30 and SU-35S fighter aircraft to teach Ukrainian pilots how to defeat Russian tactics.

“All participants in these exercises became much more ready to meet this enemy in the air and just to know sometimes not to engage under certain conditions, for example, or to engage in some specific ways,” a Ukrainian pilot who identified himself by his call sign “Juice” told The War Zone.

“Maybe that’s why our guys are still alive,” he added.

The U.S. military has also provided Ukrainians with spare parts and other equipment in order to keep their MiG-29s flying and in the fight, Undersecretary of Defense for Policy Colin Kahl told reporters recently.

“And then also, in recent PDA [presidential drawdown authority] packages, we’ve included a number of anti-radiation missiles that can be fired off of Ukrainian aircraft that can have effects on Russia radars and other things,” Kahl said on Monday at a Pentagon news briefing. “So. there are also things that we’re doing to try to make their existing capabilities more effective.”

Kahl also said the United States could consider providing the Ukrainians with more modern western aircraft down the road, but no decisions on that matter have been made.

However, Juice told The War Zone that his country can only do so much with its Soviet-era fighter aircraft. He said he would like to see Ukraine get fourth generation aircraft from the West, such as F-16s.

“Even if you’re trained, even if you’re very smart, if you don’t have the right tools, unfortunately, you can’t be effective,” Juice said. “That’s why we’re trying to ask the West to provide us with some new stuff. New jets, new ground-to-air defenses, etc.”