“Bring on the handcuffs." 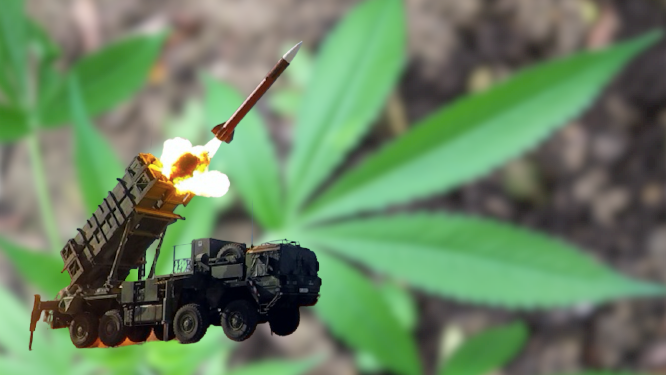 Nobody gets between a man and his marijuana, especially when the man has national security secrets on his computer and nothing to lose.

James Robert Schweitzer seems to be one of those men. The 58-year-old software engineer was charged with malicious mischief and destruction of government property last week after he allegedly leaked sensitive information about U.S. missile sensors dozens of times over a four-year period.

Why would he allegedly do such a thing? According to The Daily Beast, which first reported the story, it all started when the contractor lost his security clearance due to his medical marijuana prescription.

Schweitzer first reported his intent to use medically-prescribed marijuana to his company’s facility security officer in April 2010, according to the criminal complaint filed against him in the U.S. District Court for the Central District of California on Dec. 1.

The contractor continued using marijuana and lost his security clearance. However, he continued to work for nearly two years before resigning in July 2016. Though the complaint does not specify what company he worked for, his LinkedIn page lists him as working as a senior principal software engineer at Raytheon from May 2003 to June 2016.

So what’s a disaffected ex-contractor to do? For Schweitzer, it was allegedly leaking classified information in an attempt to blast his old company and sue the government for committing security violations. If you think that doesn’t make sense, you are right. What’s shocking is how long it took Schweitzer to get arrested for allegedly taking that route.

From 2016 to 2018, Schweitzer sent several complaints to the Pentagon Inspector General, accusing his old employer of mishandling sensitive information. However, in doing so, he also allegedly shared classified information over open networks. In 2018, a DoD investigator phoned Schweitzer to tell him to stop doing that, but he carried on undaunted, the complaint said.

Schweitzer was understandably pissed. In a 2018 call with investigators, he said he had planned to work at his company until he retired, but that became impossible after he lost his clearance. So in response, he allegedly hoped to “bait” the government to respond to his complaints about security lapses.

“Back when I submitted my complaint almost three years ago, I would have never even considered using military secrets as bait,” Schweitzer said in a March 29, 2019 email to several DoD employees and a media outlet, the complaint said. “Last summer, it became my primary tactic. Lordy, how times change.”

“I will keep pulling stunts until I am vindicated or incarcerated,” the ex-contractor said in an email to several federal agencies and a media company a few days later.

Related: Air Force captain docked pay for having four times the cut-off level of THC in his urine

Throughout 2019, Schweitzer allegedly distributed classified information by sending it to DoD over open channels, giving it to news outlets, uploading it into a public Dropbox folder and including it in a LinkedIn post, the complaint said.

“You would have thought that would have really upset someone by now,” he told a colleague on social media, the complaint said.

In September, 2019, he even tweeted a congratulations to Iran for striking oil facilities in Saudi Arabia.

“It looks like you figured out a vulnerability I tried to report to DoD over 3 years ago,” Schweitzer tweeted.

In a February, 2020 visit to the FBI’s Los Angeles field office, Schweitzer said the information in his LinkedIn article could result in American casualties abroad or at home, the complaint said.

“[B]ring on the handcuffs,” Schweitzer then told the FBI in a phone call in May, according to the complaint.

Along with handcuffs, he also wanted a letter from the government stating that he should not have been working on a classified project. His plan was to take the letter to a lawyer and sue the government, but no civil lawyer would take the case, the complaint said.

Schweitzer’s alleged actions were not without impact: On May 27, three DoD employees lost access to their email for a day as their computers were sanitized of classified information allegedly sent by the former contractor. That transmission alone cost over $8,000 in damages, the complaint said.

Even worse, in 2018 a minister at Schweitzer’s congregation told local police that the ex-contractor had thought about shooting up government buildings to get his message across, the complaint said. When police officers confronted Schweitzer at his home, he said a mass shooting was a “[expletive] it button” that he was far from pushing, though there was a possibility of him doing so if the government did not respond to his request, the complaint said.

A mental health professional declined to place Schweitzer in a mental health hold, but he continued to tell police officers about his “dark fantasy” of violence against the government and a conservative political organization.

Now Schweitzer finally has a court date. He is due for a preliminary hearing on December 28. If convicted, he faces a maximum penalty of 10 years in prison and a $250,000 fine, The Daily Beast reported.

Then we’ll see whether his plans to sue the government go up in dank smoke.