Snowden: ‘Petraeus Leaked More Damning Information Than I Did’

In an exclusive interview on Yahoo News, Edward Snowden, the national security contractor and whistleblower who leaked information about U.S.... 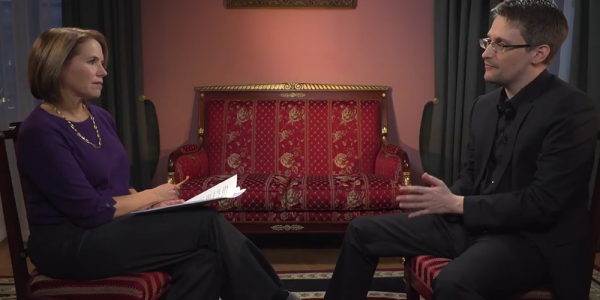 Speaking with Yahoo Global News anchor Katie Couric in Moscow, Snowden claimed that Petraeus, who is currently being considered for the role of secretary of State under Donald Trump, disclosed “information that was far more highly classified than” he ever did.

ICYMI: @Snowden tells @katiecouric Petraeus disclosed info that was "far more highly classified than I ever did” https://t.co/QSXg22AksN pic.twitter.com/wQaejsSgdq

“Perhaps the best-known case in recent history here is Gen. Petraeus — who shared information that was far more highly classified than I ever did with journalists,” said Snowden, over the course of a 90-minute interview. “And he shared this information not with the public for their benefit, but with his biographer and lover for personal benefit — conversations that had information, detailed information, about military special-access programs, that’s classified above top secret, conversations with the president and so on.”

In the interview, Snowden alleged that there is a “two-tiered system of justice” at play in charging individuals for national security leaks.

Related: David Petraeus And The Glaring Problem With His Plea Deal »

“When the government came after him, they charged him with a misdemeanor,” Snowden said. “He never spent a single day in jail, despite the type of classified information he exposed.”

In April 2015, Petraeus pled guilty to a misdemeanor charge for mishandling classified information, and received two years probation and $100,000 fine.

Snowden went on to criticize Clapper, who, in March 2013, denied that the National Security Agency was collecting information and phone records of American citizens, a claim that was later revealed to be false when Snowden leaked information on NSA wiretapping in June 2013.

“When we had the most senior intelligence official in the United States, Gen. James Clapper, who lied to the American people and all of Congress, on camera, under oath, in the Senate, in a famous exchange with Ron Wyden, he wasn’t even charged,” Snowden said. “But, giving false testimony to Congress under oath as he did, is a felony. It’s typically punished by three to five years in prison.”

Snowden’s criticism of Petraeus and Clapper comes at a time when his chances for receiving leniency from the government, possibly in the form of a plea deal or presidential pardon, are dwindling. Just last month, President Barack Obama stated that he will not consider pardoning Snowden unless he turns himself in and goes to court. Under a Trump presidency, leniency will be unlikely, with the incoming administration expected to take a hard stance against him.